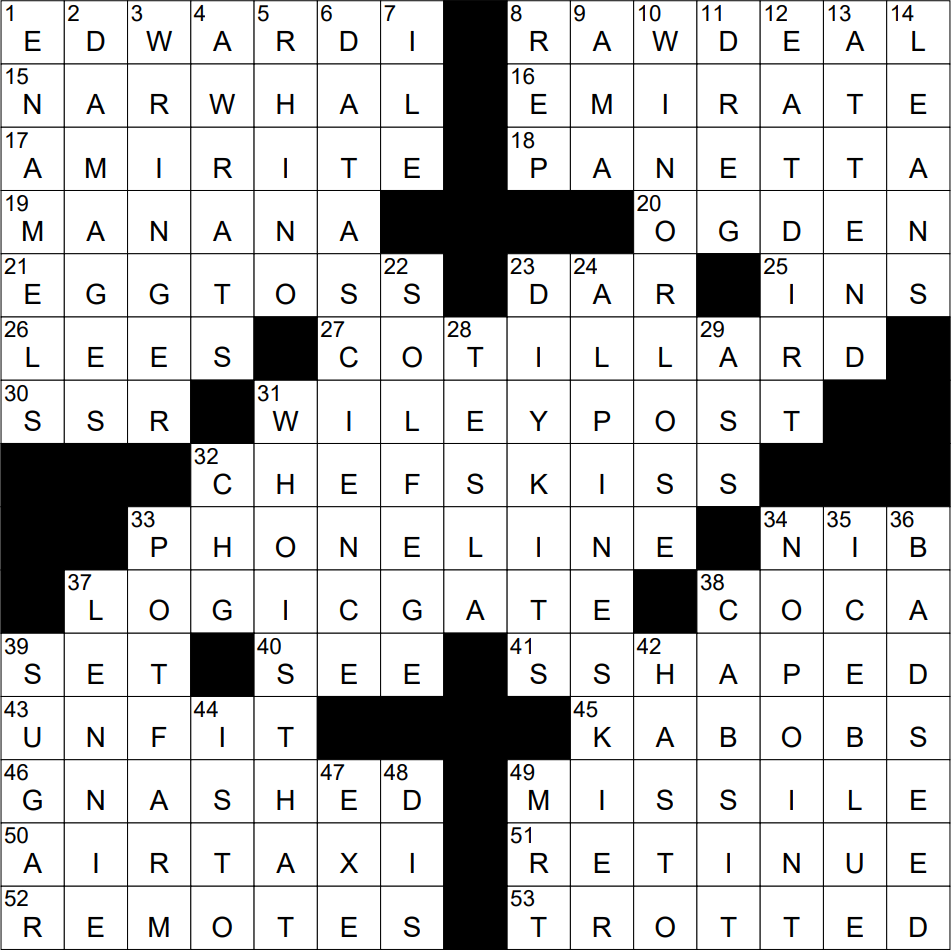 Edward I of England was on the throne from 1272 to 1307 and was also known as Edward Longshanks. The “Longshanks” name came from Edward’s exceptional height.

Something described as shoddy is of inferior quality, especially if it has a delusive appearance of high quality.

Leon Panetta was Chief of Staff under President Clinton, and took over as CIA Director in 2009 in the Obama administration. From 2011 to 2013 he also served as Secretary of Defense. Panetta has long been interested in protecting the world’s oceans. As an example, he wrote the legislation that created the Monterey Bay National Marine Sanctuary.

Ogden was the first permanent settlement by people of European descent in what is now the state of Utah.

Egg tossing is a game usually associated with Easter. In 1978, one Johnny Dell Foley tossed a fresh hen’s egg a distance of over 323 feet to a Keith Thomas to create a world record.

26 Bottom of the barrel : LEES

Marion Cotillard is the French actress who played Édith Piaf in the 2007 movie “La Vie en Rose”. Cotillard won the Best Actress Oscar for her performance, marking the first time that an actress has won a Best Actress Academy Award for a performance in a French language film.

Wiley Post was a famous aviator from Grand Saline, Texas. Post flew around the world in 1930 with just a navigator as a companion, a journey that the pair completed in the record time of 8 days and almost 16 hours. This beat the existing record of 21 days set by the Graf Zeppelin in the prior year. Post repeated the trip in 1933, this time flying alone and using an autopilot. The circumnavigation took just under 7 days and 19 hours, and was the first time anyone flew solo around the world. Post died when the aircraft he was piloting crashed just two years later, in Alaska. The famous cowboy and actor Will Rogers, a friend of Post, also perished in the crash.

A chef’s kiss is a gesture used by a chef to indicate that a dish has achieved perfection. The gesture involves kissing the tips of the gathered fingers.

34 Tip of a writing implement : NIB

“Nib” is a Scottish variant of the Old English word “neb”, with both meaning “beak of a bird”. This usage of “nib” as a beak dates back to the 14th century, with “nib” describing the tip of a pen or quill coming a little later, in the early 1600s.

41 Like many a chute in Chutes and Ladders : S-SHAPED

A retinue is a body of aides who attend an important person. The term “retinue” comes from the Old French “retenue” that had the same meaning, although the literal translation is “that which is retained”. The idea is that the aides are retained to attend the VIP.

“Papillon” is an excellent film starring Steve McQueen and Dustin Hoffman as convicts in the French penal colony on Devil’s Island (“Île du Diable” in French). “Papillon” is the French word for “butterfly” and is a reference to the character Henri “Papillon” Charrière, played by McQueen.

Solfège (also “sol-fa”) is a teaching method used in the world of music. The technique involves the use of the sol-fa syllables for each note, and associating each syllable with a specific pitch.

Super Giant Slalom (Super G) is an alpine skiing event introduced in 1982. The Super G isn’t as fast as its sister event the Downhill, but is faster than the more technical Giant Slalom.

Detective Lennie Briscoe is a character on the TV show “Law & Order” who appeared for twelve years, from 1992 until 2004. Briscoe was played by respected actor Jerry Orbach.