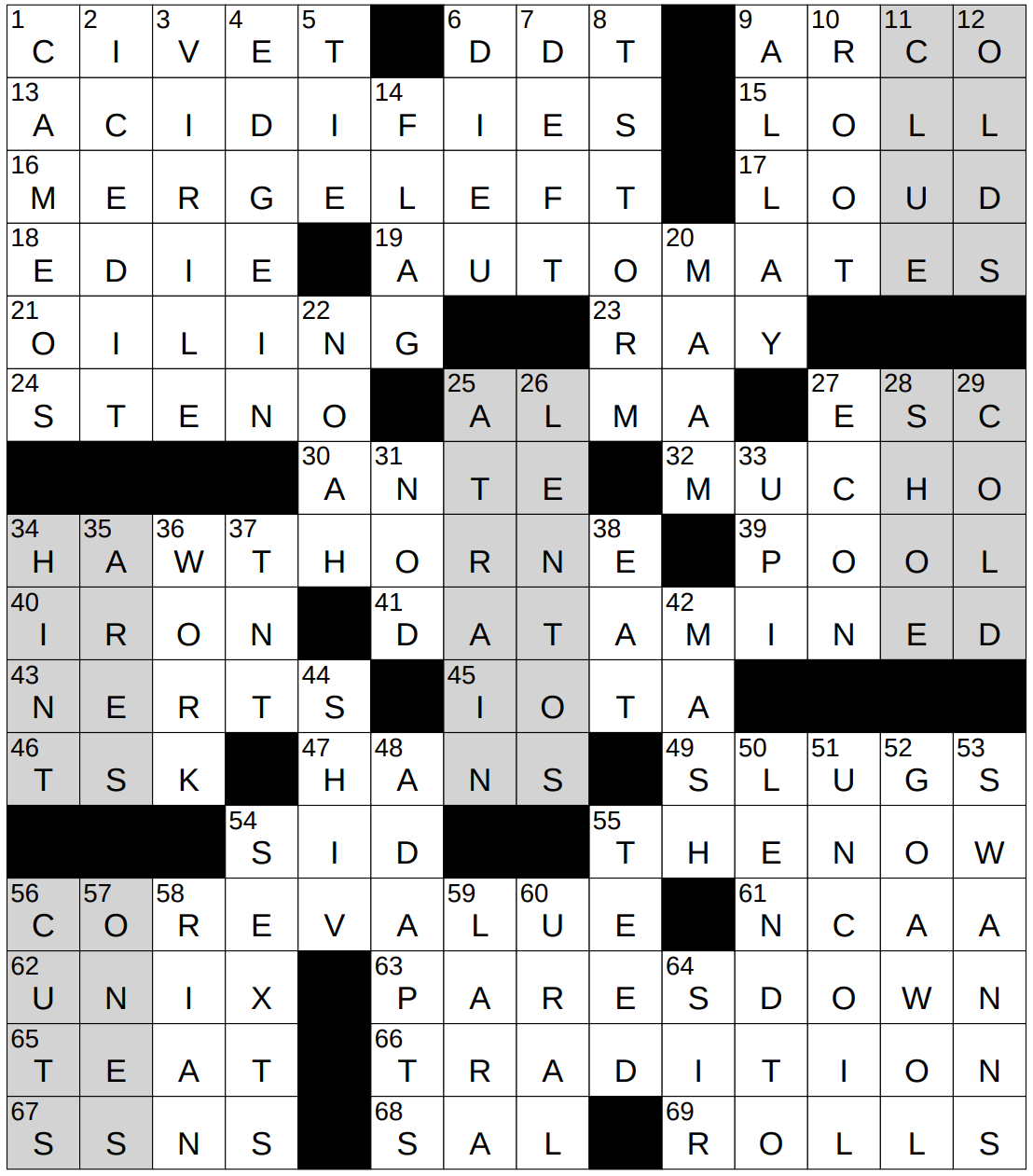 Constructed by: Simeon Seigel
Edited by: Will Shortz

Themed answers are in the down-direction and are divided into two words, side-by-side in the grid. The words are combined by MERGING the LEFT word into the one on the right:

9 Direction to bow, for a violinist : ARCO

16 What you might have to do for some highway construction … or a first hint to solving this puzzle’s theme : MERGE LEFT

25 Michigan college or its town : ALMA

Alma College in Alma, Michigan was founded by Michigan Presbyterians in 1886. The school has a Scottish heritage of which it is very proud. Alma has its own Scottish marching band, a Scottish dance troupe and even its own design of tartan.

“Bésame Mucho” was written in 1940, by Mexican songwriter Consuelo Velázquez. The title translates into “kiss me a lot”. Remarkably, according to Velázquez, at the time she wrote the song she had never herself been kissed! “Besame Mucho” was just one of Jimmy Dorsey’s eleven number-one hits, all from the thirties and forties.

“Nerts” is a slang term, a corruption of “nuts!”

A Geiger counter is a particle detector that measures ionizing radiation, such as alpha particles, beta particles and gamma rays. Often a Geiger counter is equipped with a speaker through which clicks are broadcast each time a particle is detected. We’ve all heard those terrifying clicks in movies, I am sure …

49 Slowpokes at the head of a trail : SLUGS

67 IDs since the Great Depression : SSNS

The flag of Switzerland is the very distinctive white cross on a red background. Unlike most national flags, the Swiss flag is a square, although the version used as the Swiss naval ensign is rectangular.

22 Creator of an animal shelter : NOAH

The final episode of the TV show “M*A*S*H” had a running time of 2½ hours, making it a “TV movie”. It was a much-anticipated event, and CBS capitalized on the anticipated viewing numbers. 30-second commercial blocks sold for a higher price than equivalent slots during that year’s (1983) Super Bowl.