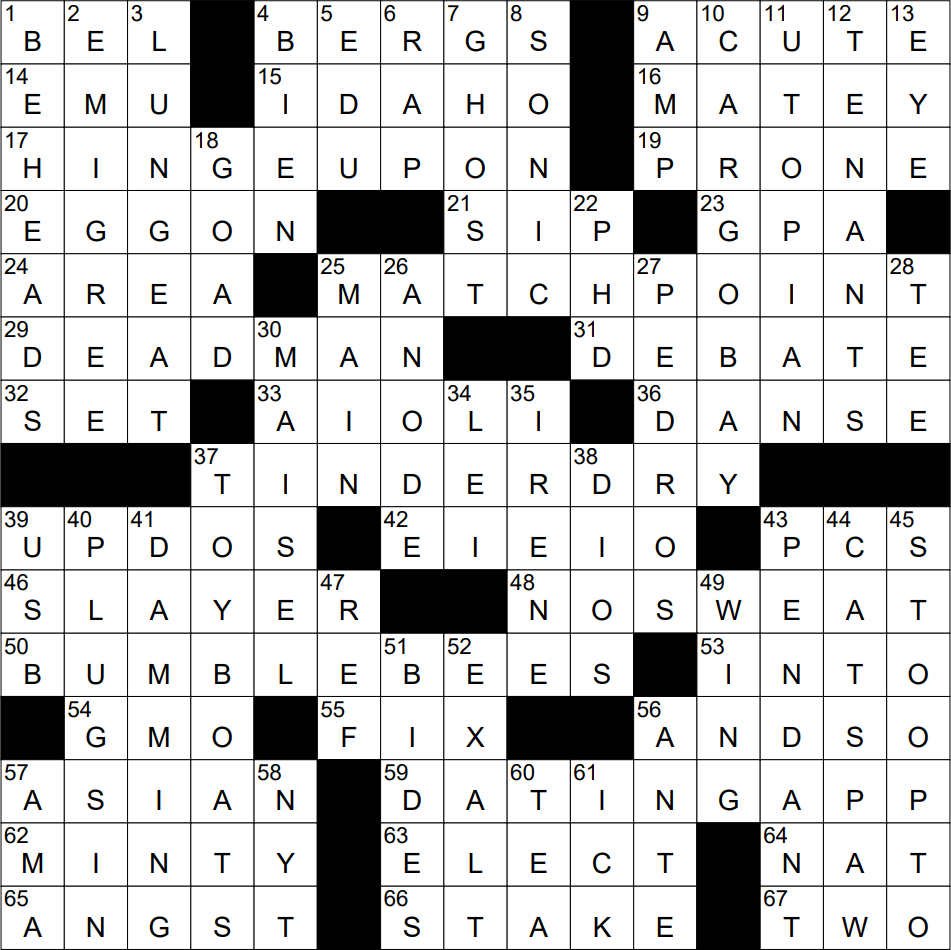 Constructed by: Sarah Sinclair
Edited by: Will Shortz

Themed answers each start with the name of a dating app:

“The Fresh Prince of Bel-Air” sitcom originally ran from 1990 to 1996. It starred Will Smith as a teenager from Philadelphia who arrives in Bel Air to live in a mansion with his wealthy aunt and uncle.

20 Encourage, as in behavior : EGG ON

The term “ballet” came into English via French from the Latin “ballare” meaning “to dance”.

Bumblebees aren’t very aggressive, but they can sting if they deem it necessary. Unlike honey bees, bumblebees survive the stinging action as their stinger has no barb. There are a few misconceptions about bumblebees. One is that a bumblebee should be incapable of flight based on the laws of aerodynamics, but this isn’t true. Another misconception is that the bee’s buzzing sound is caused by the beating of its wings. In fact, the sound comes from the vibration of its flight muscles. The bee can decouple those muscles from its wings, and so can make a buzzing sound without the wings moving at all.

Anne Boleyn was the second wife of Henry VIII of England. Anne was found guilty of high treason after about a thousand days of marriage to Henry, accused of adultery and incest (probably trumped-up charges). She was executed, but perhaps her legacy lived on in her only child, as her daughter reigned for 45 very prosperous years as Queen Elizabeth I.

2 Many an expat : EMIGREE

A rather insensitive person might break off a relationship simply by cutting off all communication with his or her partner, without any warning. Such a move is referred to as “ghosting” in modern parlance, particularly when the relationship relies heavily on online interaction.

The word “Utopia” was coined by Sir Thomas More in his book “Utopia” published in 1516 to describe an idyllic fictional island in the Atlantic Ocean. More’s use of the name Utopia comes from the Greek “ou” meaning “not” and “topos” meaning “place”. By calling his perfect island “Not Place”, More was apparently making the point that he didn’t think that the ideal could actually exist.

12 Ones with leases : TENANTS

A tenant is a person or entity “holding” property by virtue of title or lease. The term “tenant” comes from the Latin “tenere” meaning “to hold”.

A goad is a pointed rod that is used to push on an animal. It is from the noun that we get the verb “to goad” meaning “to incite, rouse”.

22 Hood wearer at a graduation, for short : PHD

“The Marvelous Mrs. Maisel” is a comedy drama TV show set in the late fifties and early sixties. The title character, played by Rachel Brosnahan, is a New York housewife who opts for a career as a standup comedian.

44 Person being used by another : CAT’S-PAW

There’s an old tale, dating back to the 16th century, about a monkey persuading a cat to pull chestnuts out of the fire for him to avoid burning his own paws. Since then, “cat’s-paw” used to describe a dupe, someone used by another.

The process for making most teas involves oxidation. During oxidation, the leaves become darker in color as chlorophyll breaks down and tannins are released. The oxidation step is skipped when producing green teas.