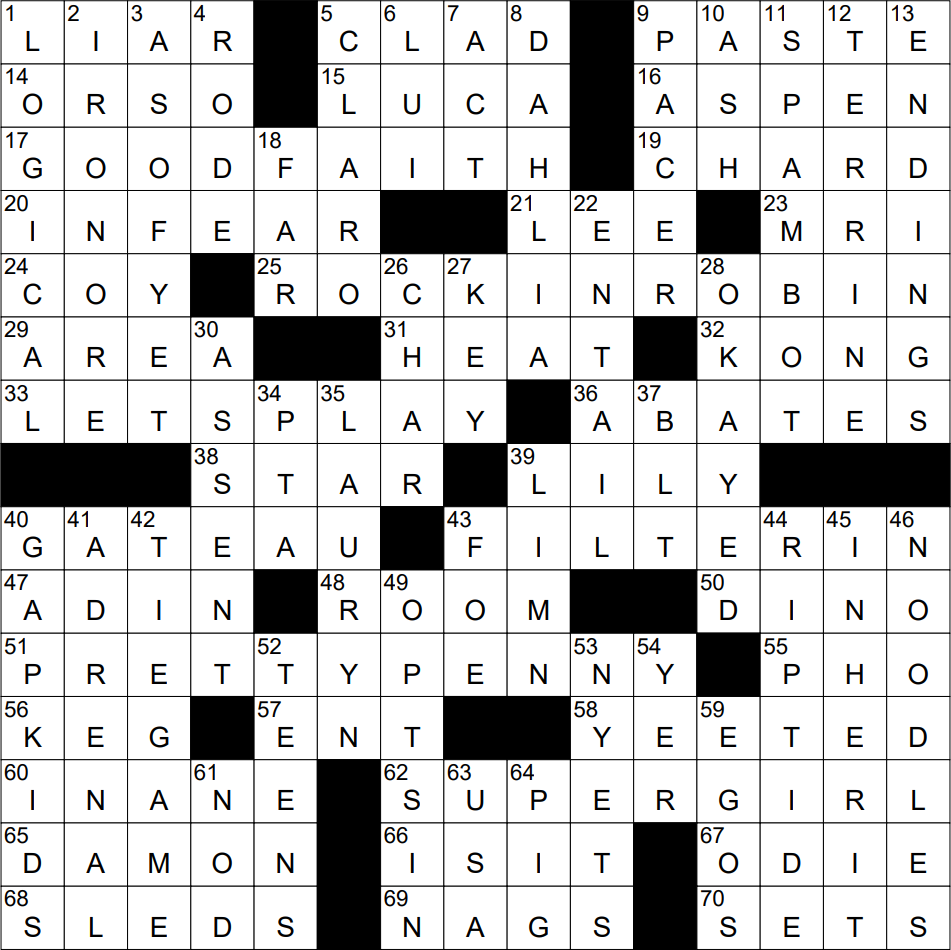 Constructed by: Ailee Yoshida
Edited by: Will Shortz

Themed answers each comprise two words. The first is a synonym of “SUPER”, and the second a girl’s NAME:

“Luca” is a 2021 Pixar animated film. The title character is a sea monster boy who can take the form of a human while on land.

Bruce Lee was born in San Francisco, although he was raised in Hong Kong returned to the US to attend college. Sadly, Bruce Lee died when he was only 32 years old, due to cerebral edema (a swelling of the brain) attributed to adverse reactions to the pain killing drug Equagesic.

1933’s “King Kong” really is a classic. It stars Fay Wray as the young woman (Ann Darrow) with whom Kong falls in love. Wray was very interested in the role as she was told that she would be playing opposite the “tallest, darkest leading man in Hollywood”. She thought it might be Clark Gable. At least, that’s how the story goes …

The first video game featuring the ape named Donkey Kong was created in 1981. That same game introduced the world to the character known as Mario, four years before the game Super Mario Bros became such a big hit.

Leucocrinum is a perennial plant that is native to the American West. It is a stemless plant, and grows to a height of maybe 4 inches. Because it has star-shaped flowers and long, narrow leaves, the leucocrinum is also known as the star lily.

47 Possible score after deuce : AD IN

50 Yoshi of Mario games is one, for short : DINO

62 Kara Zor-El’s identity in DC Comics … or a punny hint to the answers to the starred clues : SUPERGIRL

“The Martian” is an intriguing 2015 science fiction film starring Matt Damon as an astronaut who is accidentally stranded on Mars. The movie is based on a 2011 novel of the same name by Andy Weir. One thing that I liked about the film is that the science cited is fairly realistic. In fact, NASA collaborated with the filmmakers extensively from script development to principal casting.

To badger is to harass. The verb “to badger” comes from the cruel practice of badger-baiting, which dates back to medieval times. Badger-baiting is a blood sport in which a dog is used as bait for a badger in its den, to draw it out into the open. The den is an artificial structure built to resemble a natural badgers’ den, complete with a tunnel entrance. The dog is sent down the tunnel causing the badger and dog to lock their jaws on each other. The badger and dog are then removed from the den by pulling on the dog’s tail. Horrible …

The dahlia is a flowering plant native to Mexico and Central America. It was named the national flower of Mexico relatively recently, in 1963. The plant was given the name “dahlia” in 1791, in honor of Swedish botanist Anders Dahl.

The stock phrase “Once upon a time …” has been used in various forms as the start of a narrative at least since 1380. The stock phrase at the end of stories such as folktales is often “and they all lived happily ever after”. The earlier version of this ending was “happily until their deaths”.

Lauryn Hill is a singer-songwriter from South Orange, New Jersey who is best known as a member of the band called the Fugees (from 1994 to 1996). Off stage, Hill is known for having five children with Rohan Marley, the son of reggae icon Bob Marley. She was also in the public eye in 2010 when she served 3 months in jail for tax evasion.

37 Sandwich named for its ingredients : BLT

To limn is to describe, or portray in a painting or a drawing. “Limn” has the same root as “illuminate”, in the sense of illuminating a manuscript.

“Party in the USA” is a 2009 song released by Miley Cyrus. It was co-written by Jessi J, with the intention that she would record it herself. She decided that the end product wasn’t “edgy” enough for her, and so passed it onto Cyrus. The Cyrus version made it to number-two in the charts, and Jessie J eventually recorded a cover version.

The word “pig” can be used for earthenware, or an earthenware shard. From this usage there evolved the term “pig jar” that described an earthenware pot that could be filled with water for use as a bed-warmer. Crockery pots were also used to collect coins and these were also termed “pig jars”. By the 1700s, these pig jars had evolved into the first “piggy banks”.