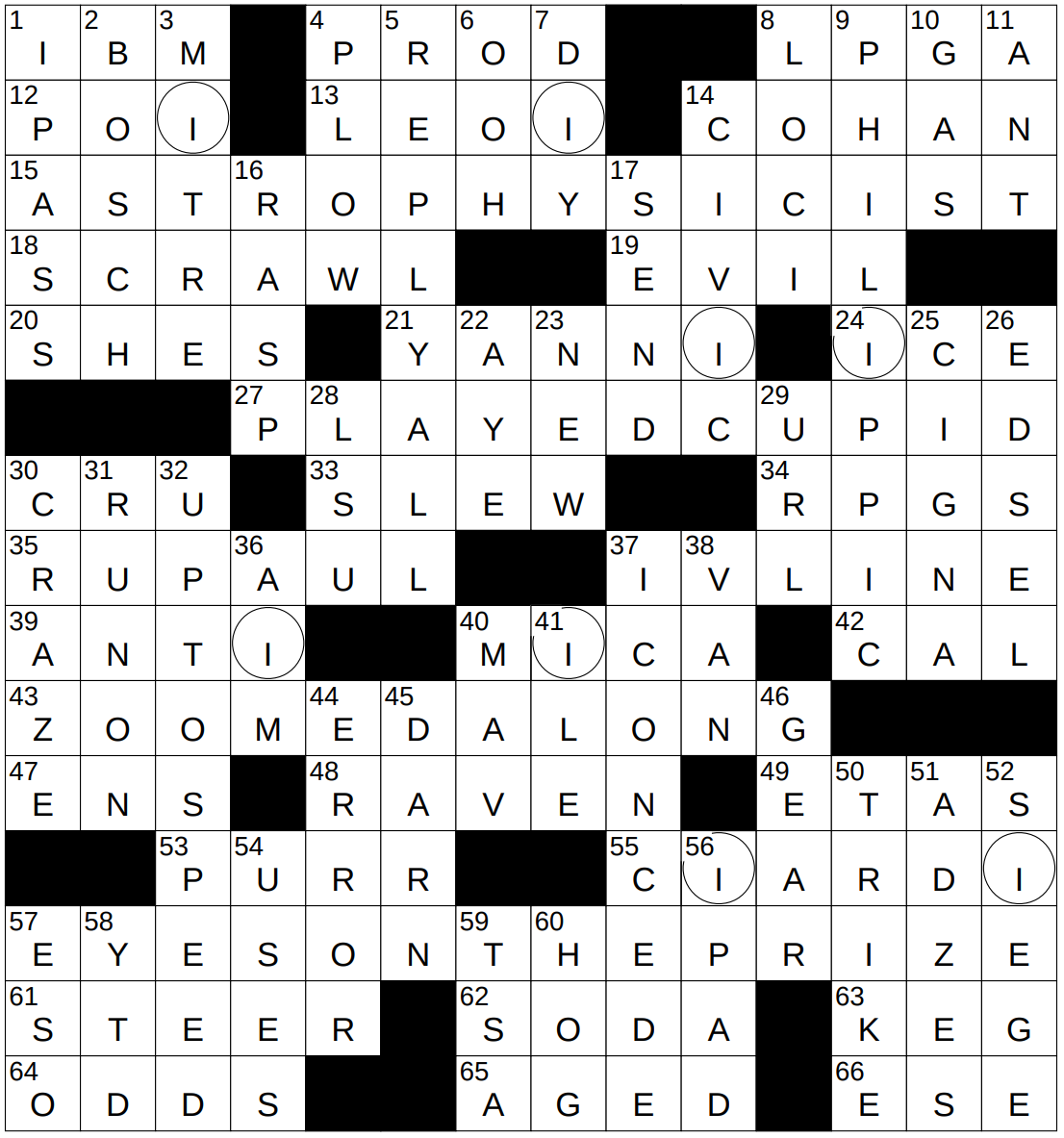 Themed answers each include a PRIZE as a hidden word. There are letters I, circled in the grid, at the start and end of each prize, in the line above:

13 “The Great” pope between Sixtus III and Hilarius : LEO I

Pope Saint Hilarius (also Hilary) was head of the Roman Catholic Church from 461 to 468.

Six Beatles song titles feature the word “she”, and they are:

Yanni is a remarkable Greek musician who is very successful in the world of New Age music. What I find so remarkable is that he is a self-taught musician. Yanni was born Yiannis Chryssomallis in Kalamata, Greece and moved to the US in 1972 to attend the University of Minnesota.

37 One way to administer fluids, for short : IV LINE

John Ciardi was a Bostonian who was mainly known as a poet. Ciardi wrote a textbook on how to read, write and teach poetry titled “How Does a Poem Mean?”. He also published a famous translation of Dante’s “Divine Comedy”.

A miter (also “mitre”) is a traditional headdress worn by bishops in some Christian traditions. The term “miter” comes from a Greek word for “headband, turban”.

8 Collections of points in math : LOCI

“Locus” (plural “loci”) is Latin for “place”, and is used in English with the same meaning. The term can also be used to describe a center of power or activity. In mathematics, a locus is a set of points that satisfy some property. For example, a locus might be a straight line, part of a line, a surface, or perhaps a curve.

A philippic is a damning speech designed to bring down a politician. The original “philippic” was delivered in the 4th century BCE by the Greek statesman Demosthenes, and was an attack on Philip II of Macedon, hence the name.

10 Filling at a filling station : GAS

Introduced in 1972, the Honda Civic is the second-oldest brand of Japanese car made for the US today (only the Toyota Corolla has been around longer). Today’s Civic is a compact car, but the original was smaller, and classed as a sub-compact. The first design had a transverse-mounted engine and front-wheel drive to save on space, copying the configuration introduced with the British Mini.

The health care management company known as Cigna was formed in 1982 by a merger of two insurance companies. One was Connecticut General (CG) and the other Insurance Company of North America (INA).

29 Address on a business card : URL

We’ve been using “fiddlesticks” to mean “nonsense” since the early 17th century. Prior to that time, “fiddlestick” referred to the bow of a fiddle.

Tegucigalpa is the capital of Honduras, and is a city often known by the name “Téguz”. It is a city with many problems. Its infrastructure is very strained, with the transportation system in particular extremely strapped. Crime is also a big problem, which might be expected given that Tegucigalpa is the capital of the nation with the highest murder rate in the whole world.