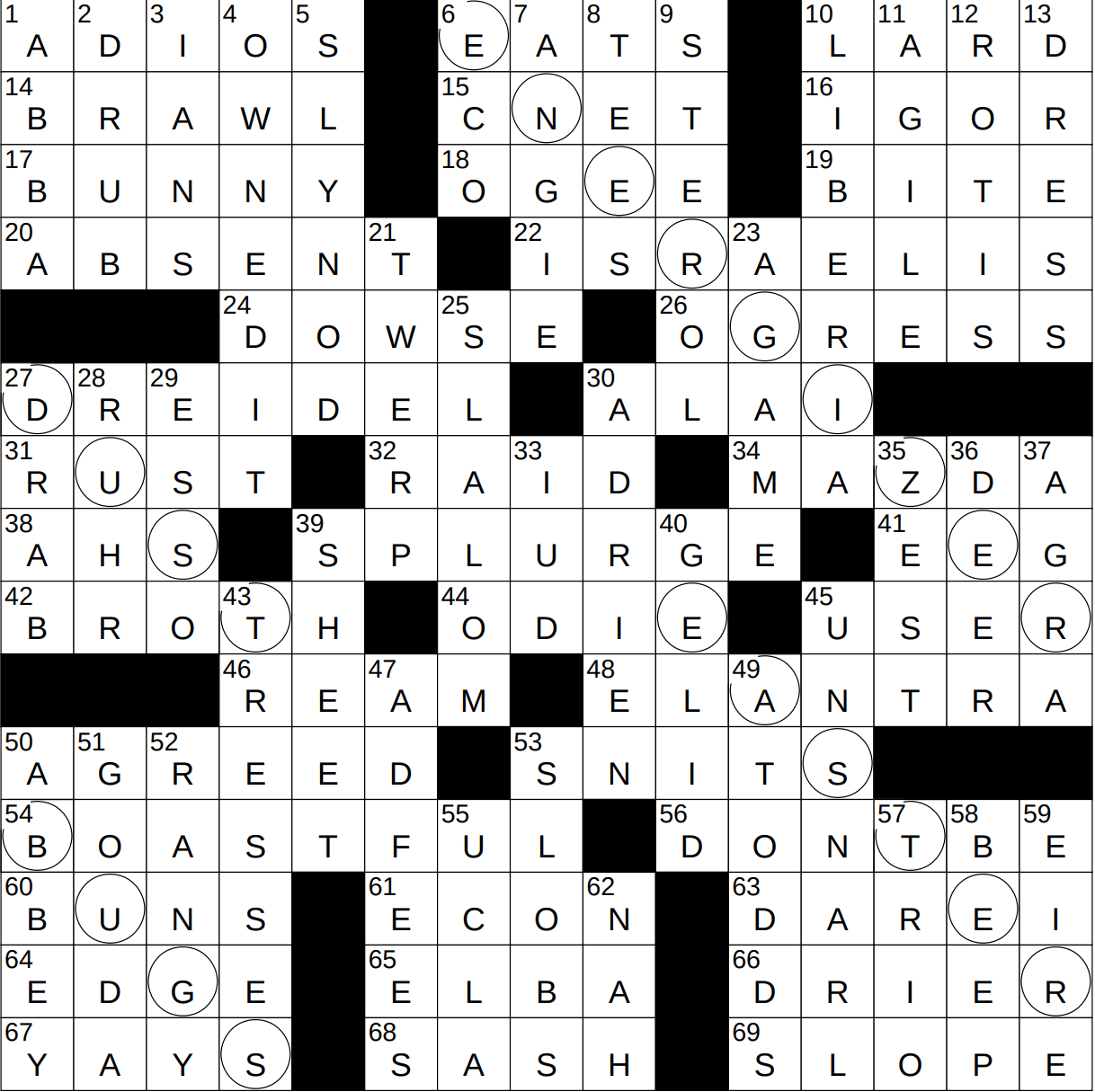 Four sets of circled letters SLOPING down in the grid spell out famous BUNNIES:

DUST BUNNY
What we call “dust bunnies” in American English, have similar inventive names in other languages. The Finns know them as sheep, the Germans wool mice, the Hungarians dust kittens, the Italians dust cats, and the Swedish dust rats.

EASTER BUNNY
The original Easter “Bunny” was an Easter “Hare”, and was part of a traditional celebration by German Lutherans. Legend held that the Easter Hare decided if children had been well-behaved in the prior year, and deserving of Easter eggs and candy.

BUGS BUNNY
Bugs Bunny debuted in the 1940 animated short “A Wild Hare”. Since then, Bugs has appeared in more films than any other cartoon character.

22 Most workers on a kibbutz : ISRAELIS

The term “bogeyman” (and “bogeywoman”) seems to be derived from the Scottish word “bogle” meaning “ghost”.

A dreidel is a spinning top with four sides that is often associated with the Jewish holiday of Hanukkah. Each of the four sides on a dreidel bears a letter from the Hebrew alphabet (nun, gimel, hei and shin). The four letters are the initials of the Hebrew phrase “Nes Gadol Hayah Sham” meaning “a great miracle happened there”. According to tradition, children would be taught Torah while hiding in caves away from the Greeks. When Greek soldiers approached, the children would hide their torah scrolls and play with their dreidels instead.

34 Automaker based in Hiroshima : MAZDA

The name “John” translates into Scottish as “Ian” or “Iain”, into Russian as “Ivan”, into Italian as “Giovanni”, into Spanish as “Juan”, into Welsh as “Evan”, and into Irish as “Seán”.

Monrovia is the capital of Liberia in West Africa. The city was named for US President James Munroe. Monroe was a supporter of the American Colonization Society, which helped found the colony of Liberia.

12 Flatbreads that may be served with saag paneer : ROTIS

Palak paneer is a dish from Indian cuisine. It consists mainly of paneer (a freshly-made cheese) in a puréed spinach paste. Saag paneer is a more generic form of the dish, one in which other leafy vegetables can be used to make the paste, e.g. mustard greens, collard greens or broccoli.

The Ruhr is a large urban region in western Germany. The area is heavily populated, and is the fifth largest urban area in the whole of Europe after Istanbul, Moscow, London and Paris. The Ruhr became heavily industrialized due to its large deposits of coal. By 1850, the area contained nearly 300 operating coal mines. Any coal deposits remaining in the area today are too expensive to exploit.

Petro-Canada started out as a government-owned corporation in 1976. Petro-Canada is now a brand name of Suncor Energy.

Adrien Brody won a Best Actor Oscar for his performance in the Roman Polanski masterpiece “The Pianist”. Brody won the award in 2003 at the age of 29, making him the youngest person ever to receive the Best Actor Oscar.

The most famous mausoleum in the world has to be the Taj Mahal in Agra, India. It was built after the death of the fourth wife of Shah Jahan, Mumtaz Mahal (hence the name of the mausoleum). The poor woman died in childbirth delivering the couple’s 14th child. When Shah Jahan himself passed away 35 years later, he was buried beside his wife Mumtaz, in the Taj Mahal.

“Gelid” is such a lovely word, one with the meaning “icy cold”. “Gelid” derives from the Latin “gelum” meaning “frost, intense cold”.

55 Sch. that used to bring a live bear onto the field at its home football games : UCLA