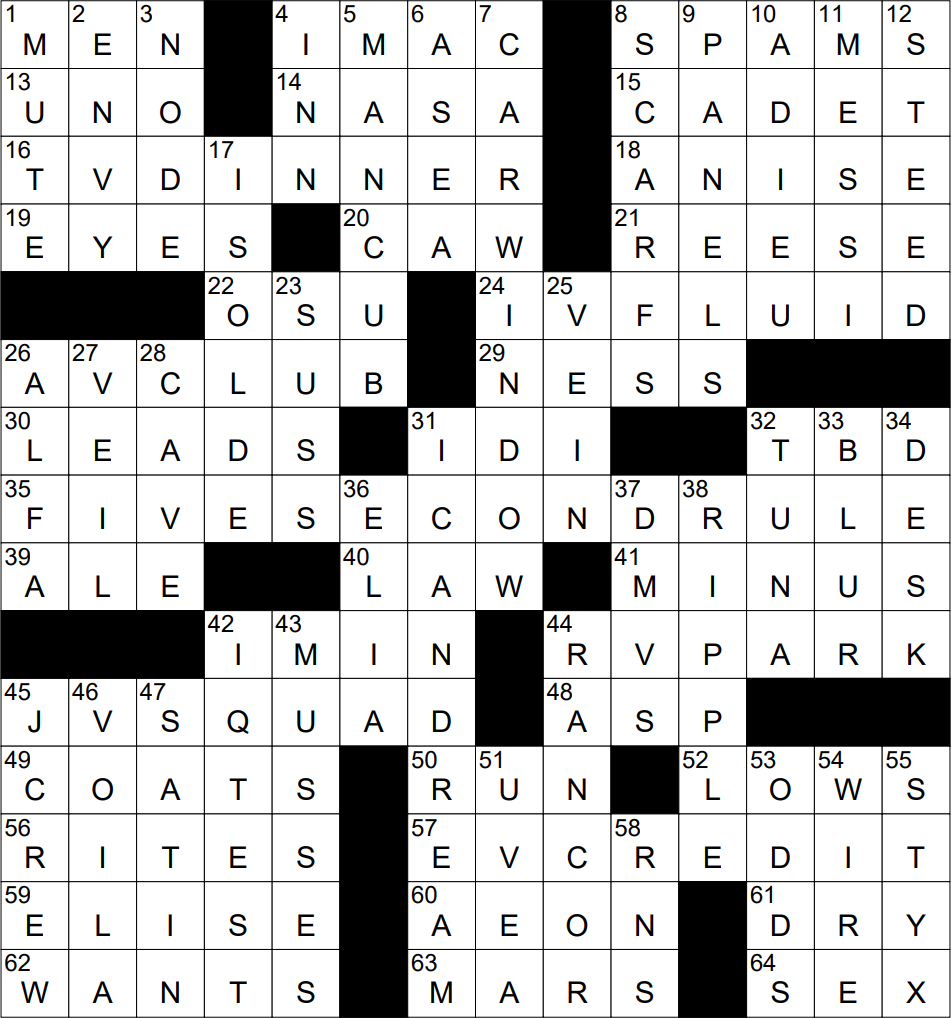 The letter V, the Roman numeral for “Five”, is the second letter in each of today’s themed answers:

8 Inundates with some junk : SPAMS

In my youth I remember being taught a great card game by a German acquaintance of mine, a game called Mau Mau. Years later I discovered that UNO! is basically the same game, but played with a purpose-printed deck instead of the regular deck of playing cards that’s used for Mau Mau. I hear that Mau Mau is derived from the game called Crazy Eights.

14 Org. that sent Perseverance to 63-Across : NASA

There have been several rovers sent to Mars from Earth. The Soviet Union’s Mars 2 landed in 1971, and failed. Mars 3 landed the same year, and ceased operation just 20 seconds after landing. NASA’s Sojourner landed in 1997 (what a great day that was!) and operated from July through September. The British rover Beagle 2 was lost six days before its scheduled entry into the Martian atmosphere. NASA’s Spirit landed in 2004, and operated successfully for over six years before getting trapped in sand and eventually ceasing to communicate. NASA’s Opportunity also landed in 2004, and operated for over fourteen years. And then NASA’s Curiosity made a spectacular, hi-tech landing in 2012 and is continuing to explore the planet today. Based on the Curiosity design, NASA’s Perseverance rover landed in 2021, along with the Mars helicopter named Ingenuity. The China National Space Administration landed its first rover, named Zhurong (“Rover” in English), five months after Perseverance started its mission on the planet.

The University of Michigan in Ann Arbor is the oldest university in the state, having been founded in 1817 in Detroit. The move to Ann Arbor from Detroit was made in 1837. Michigan’s athletic teams are known as the Wolverines.

Idi Amin received most of his military training in the British armed forces, eventually achieving the highest rank possible for a Black African in the British Colonial Army in 1959, that of Warrant Officer. On his return to Uganda Amin joined his country’s military and quickly rose to the rank of Deputy Commander of the Army. During that time he was quite the athlete. He was a noted rugby player and swimmer, and for nine years held the Ugandan national light-heavyweight boxing title. By the early seventies, Amin was commander of all the armed forces of Uganda and in 1971 seized power in a military coup, displacing the country’s president Milton Obote. There followed seven years of brutal rule by Amin during which it is estimated that between 100,000 and 500,000 people were murdered. Amin was ousted from power in 1979 after a war with Tanzania, and fled to Libya where he stayed for a year. He then moved to Saudi Arabia, where he was financially supported by the Saudi Royal Family for the remainder of his life. Amin died in 2003.

To be determined (TBD)

35 Dubious food-eating guideline … or a hint to the answers to this puzzle’s starred clues : FIVE-SECOND RULE

There’s a myth that food dropped on the floor that is picked up within five seconds is free from contamination. The myth goes by the name “five-second rule”, or sometimes “ten-second rule”.

In the animal kingdom, the group of reptiles known as snakes (and snake-like lizards) are called “ophidians”. “Ophi” is the Greek word for “serpent”.

56 Bris, bat mitzvah and others : RITES

A mohel is a man who has been trained in the practice of brit milah (circumcision). Brit milah is known as “bris” in Yiddish. The brit milah ceremony is performed on male infants when they are 8 days old.

“Æon Flux” is an animated science-fiction television show that originally aired on MTV in the nineties. The TV show inspired a 2005 movie of the same name that starred Charlize Theron in the title role.

Back in the late 60s, “Jones” was a slang term for an intense desire or an addiction. This usage probably came from an earlier meaning for “Jones” as a synonym for “heroin”. The etymology of the heroin definition is very unclear.

5 Nickname for Mowgli in “The Jungle Book” : MAN-CUB

11 International athlete who twice made Time’s list of the 100 most influential people in the world : MESSI

“Tristan und Isolde” is an epic opera by Richard Wagner (Wagner … not one of my favorites!). Many see the work as the first serious move away from the traditional harmony and tonality of the classical and romantic eras.

31 “My lotto ticket might be the winner” : I CAN DREAM

In a sushi restaurant, the dish called “toro” is the fatty tissue from the belly of the bluefin tuna.

What Americans know today as “Real IDs” are the result of the Real ID Act of 2005. One of the most visible results of the law are state-issued drivers’ licenses that meet new minimum security standards set by the federal government.

42 Something to think about? : IQ TEST

J.Crew is a clothing and accessory retailer. Never been there, but I’ve seen the name turn up on credit card statements somehow …

The material known as “satin” takes its name from “Zayton”, the medieval Arabic name for the Chinese port city of Quanzhou. Quanzhou was used for the export of large amounts of silk to Europe.

51 Layer beneath the sclera and cornea : UVEA

A registered nurse (RN) might work in an operating room (OR).