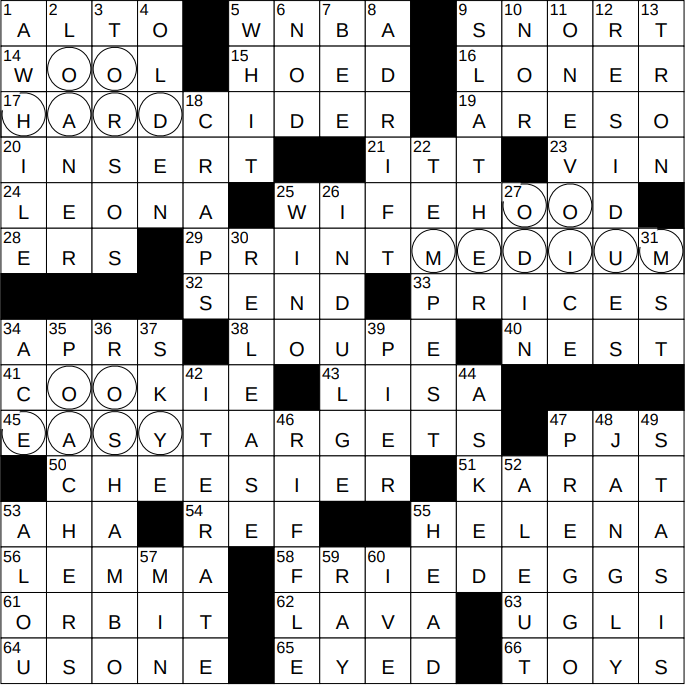 Constructed by: Lillian Simpson
Edited by: Will Shortz

Circled letters O in the grid are EGGS. We have three sets of FRIED EGGS in the grid: EGGS over HARD, EGGS over MEDIUM, and EGGS over EASY:

5 Sports org. for the Sky and the Sun : WNBA

The Chicago Sky are a professional basketball team based in Rosemont, Illinois that plays in the Women’s National Basketball Association (WNBA). The Sky were founded in 2006

An adult male sheep is a ram, although a castrated ram is known as a wether. An adult female is a ewe, and a young sheep is a lamb.

In the television sitcom “The Addams Family”, the family had a frequent visitor named Cousin Itt. Itt is a short man with long hair that runs from his head to the floor. He was played by Italian actor Felix Silla.

Leona Helmsley was a high-rolling real estate investor and hotel operator in New York City. She was convicted of income tax evasion in 1989 and sentenced to 16 years in jail. At her trial a witness quoted her as saying “We don’t pay taxes. Only the little people pay taxes.” No wonder she was known as the Queen of Mean …

While wasps are considered a nuisance by many, they are very important to the agricultural industry. Wasps prey on many pest insects, while having very little impact on crops.

A lemma is a helping theorem, a subsidiary proposition that helps prove some other proposition. A problem offering two equally acceptable (or unacceptable) possibilities might be described as a “double lemma”, and hence our term “dilemma”.

62 It can harden into igneous rock : LAVA

18 Game where rolling two fours is a “square pair” : CRAPS

36 Rock-paper-scissors, by another name : ROSHAMBO

47 Expecting a baby, in slang : PREGGO

We use base-10, the decimal system for our numbers. Base-60, the sexagesimal system, was used by the ancient Babylonians. This ancient usage gives rise to our 60 seconds in a minute, and 360 (6 x 60) degrees in a circle.