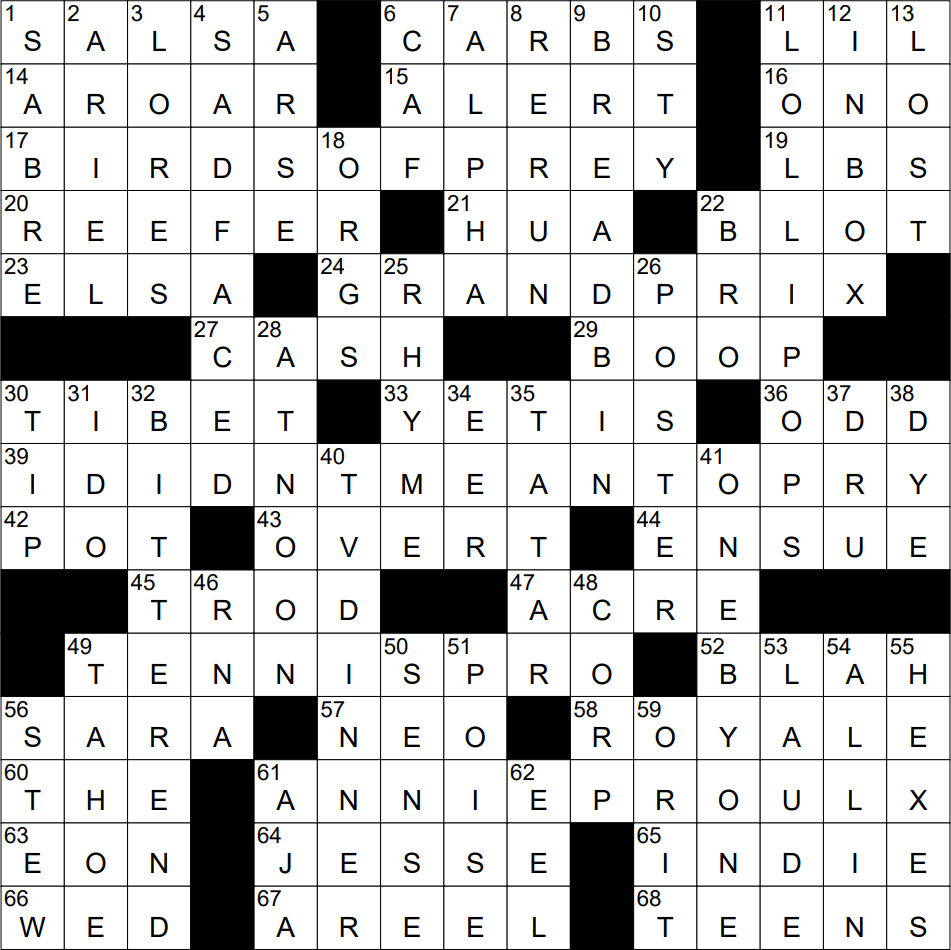 Constructed by: Michael T. Buerke
Edited by: Will Shortz

Themed answers include a vowel progression with a twist. Each includes the letter sequence “PR” followed by the sound of a vowel’s name, progressing through A, E, I, O and U as we descend the grid:

6 What pasta and potatoes have a lot of : CARBS

In China, the term “paramount leader” has been used since the days of Mao Zedong to describe the person who holds several leadership offices concurrently. The paramount leaders have been:

Betty Boop made her first appearance on the screen in 1930, in a cartoon called “Dizzy Dishes”. Her character was modeled on the It-girl, the sexy Clara Bow of movie fame. Back then Betty Boop was a sexy poodle and it wasn’t until 1932 that she morphed into completely human form. Betty was quite the risqué figure, but her vampish ways only lasted a few years. When the Production Code of 1934 came into force, Betty started to dress more modestly and toned down her behavior.

“Bizarre” is a French word, one with the same meaning in French as English. However, back in the 16th century, “bizarre” used to mean “handsome, brave” in French. I guess that’s what my wife means when she refers to me as “bizarre” …

Isle Royale in Michigan is the largest island in Lake Superior. The main island, along with over 400 smaller surrounding islands, is now part of Isle Royale National Park.

Author Annie Proulx’s second novel, “The Shipping News”, won her a Pulitzer and was adapted into a 2001 movie of the same name. Her 1997 short story “Brokeback Mountain” also made it to the big screen, as a 2005 film also with the same name.

5 Backside, as the Brits call it : ARSE

25 What Prancer and Dancer do that Rudolph and Vixen don’t? : RHYME

28 When the sun is highest in the sky : AT NOON

The Mongols are an ethnic group found today in modern Mongolia, in China and in Russia.

Back in the early 1400s, “poise” meant “quality of being heavy”. We’ve been using the term to mean “steadiness, composure” since the mid-1600s, in the sense of being equally “weighted” on either side.