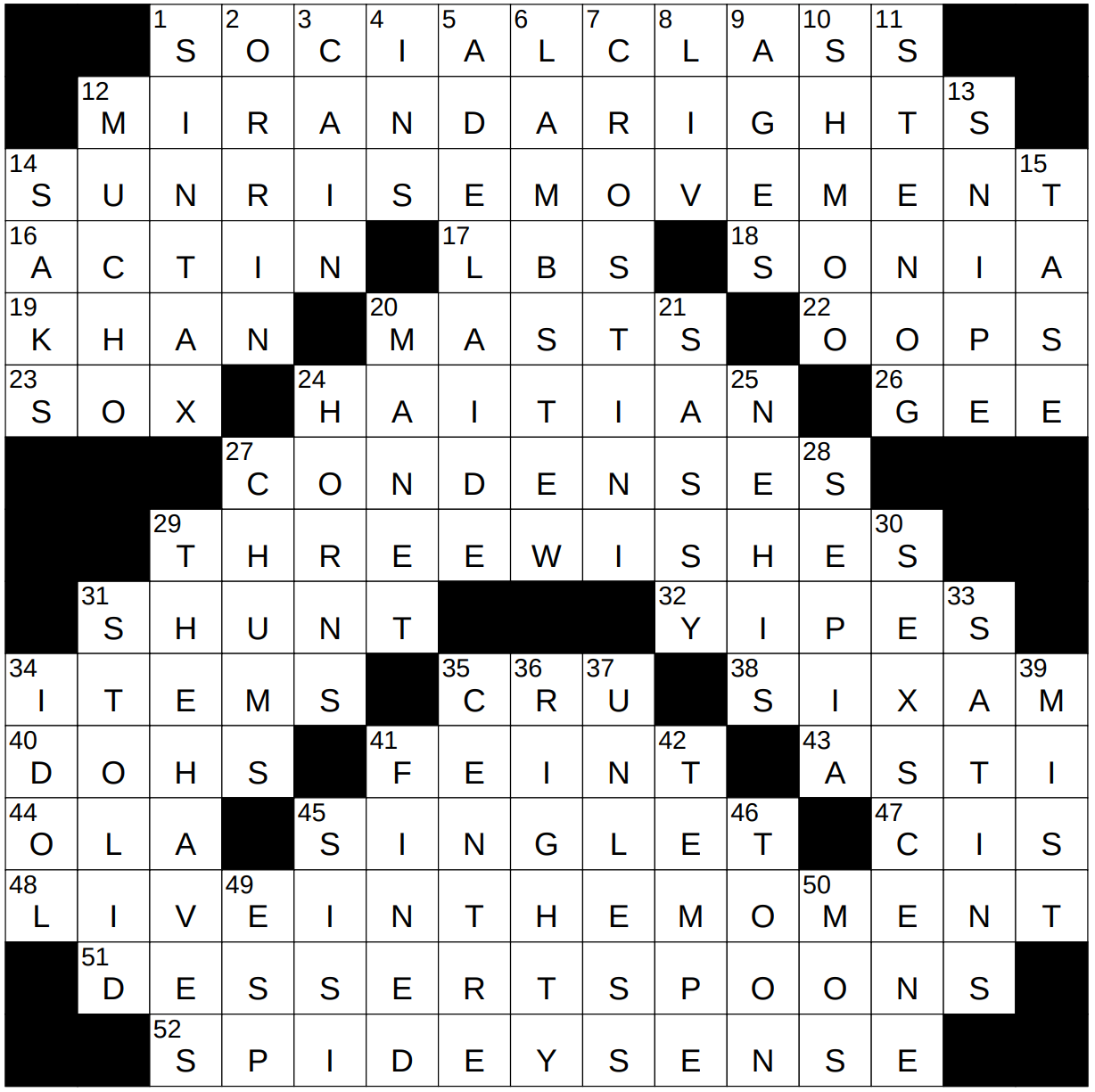 Constructed by: Daniel Okulitch
Edited by: Will Shortz

The Miranda warning is given by US police officers to suspects in order to ensure that any statements made by the suspect can be used at trial. The warning became part of police procedure after a 1966 Supreme Court decision in the case of Miranda v. Arizona. The crux of the court’s decision was that statements made by a suspect during interrogation were only admissible at trial if the defendant was informed of his or her right to consult an attorney, and right to remain silent. The “Miranda” in the case was Ernesto Miranda, who was arrested by the Phoenix PD on suspicion of kidnapping and rape. The Supreme Court decision set aside Miranda’s conviction as his confession was deemed inadmissible. Miranda was rearrested and retried. At the second trial he was convicted without the use of the contested confession.

A “khan” was a medieval sovereign, more specifically a ruler over Mongol, Turkish and Tatar tribes.

20 Holders of some radio aerials and signal lamps : MASTS

The Boston Red Sox are one of the most successful Major League Baseball teams and so command a large attendance, but only when on the road. The relatively small capacity of Boston’s Fenway Park, the team’s home since 1912, has dictated that every game the Red Sox have played there has been a sell-out from May of 2003 to April 2013. I recently had the pleasure of touring Fenway Park. It’s quite a place …

The mild expletive “Holy moly!” is a euphemism for “Holy Moses!”

The term “cisgender” is used as the opposite of “transgender”. Cisgender people have a gender identity that matches the sex they were assigned at birth.

“Spidey-sense” is a term used to describe one’s intuition or instinct, especially when sensing something that might be dangerous. The term arises from the comic book hero Spider-Man’s ability to sense danger before others.

A sin tax is a levy placed on goods that are considered to be harmful. Examples might be taxes placed specifically on alcohol, tobacco, marijuana, sweetened beverages, fast food and gambling. Sin taxes are imposed to discourage use. The related Pigovian tax is imposed to offset the cost to society of using the “sinful” goods or services.

3 What’s raised in a ruckus : CAIN

The word “ruckus” is used to mean “commotion”, and has been around since the late 1800s. “Ruckus” is possibly a melding of the words “ruction” and “rumpus”.

5 English queen who lent her name to a city of 1.3+ million in the British Commonwealth : ADELAIDE

Crostini are Italian appetizers (literally “little toasts”) made up of pieces of toasted bread with a topping.

The Shmoo is a cartoon creature who first appeared in the Al Capp comic strip “Li’l Abner” in 1948. Apparently, shmoos are delicious to eat, and love to be eaten. They’ll even jump into the frying pan themselves!

To snipe is to attack with snide criticism, especially from a safe distance. This usage of the term is an extension of the older meaning, to take a shot from a hidden position (as in “sniper”). Such a shot was originally taken when hunting the game birds called “snipes”.

14 Retailer whose logo is written in script : SAKS

Édouard Manet was a French painter whose works are mainly classified as Realist and Impressionist. Manet was friends with Impressionists masters like Edgar Degas, Claude Monet and Pierre-Auguste Renoir and greatly influenced the Impressionist movement. The list of Manet’s marvelous paintings includes “Le Déjeuner sur l’Herbe”, “Le Repose” and “A Bar at the Folies-Bergère”.

Paul Cézanne was a post-impressionist artist who was born and worked in the beautiful city of Aix-en-Provence in the South of France. Cézanne has the reputation of being the artist who bridged the late 19th century Impressionist movement with the early 20th century Cubist movement. Both Henri Matisse and Pablo Picasso are quoted as saying that Cézanne “is the father of us all”.

24 What the instruments erkencho and shofar are made of : HORNS

A shofar is a musical instrument used in Jewish rituals. It is a relatively simple instrument, made from an animal’s (usually a ram) horn.

Sepia is that rich, brown-gray color so common in old photographs. “Sepia” is the Latinized version of the Greek word for cuttlefish, as sepia pigment is derived from the ink sac of the cuttlefish. Sepia ink was commonly used for writing and drawing as far back as ancient Rome and ancient Greece. The “sepia tone” of old photographs is not the result of deterioration over time. Rather, it is the result of a deliberate preservation process which converts the metallic silver in the photographic image to a more stable silver sulfide. Prints that have been sepia-toned can last in excess of 150 years.

The material known as “satin” takes its name from “Zayton”, the medieval Arabic name for the Chinese port city of Quanzhou. Quanzhou was used for the export of large amounts of silk to Europe.

42 Home of one of the country’s largest state universities : TEMPE