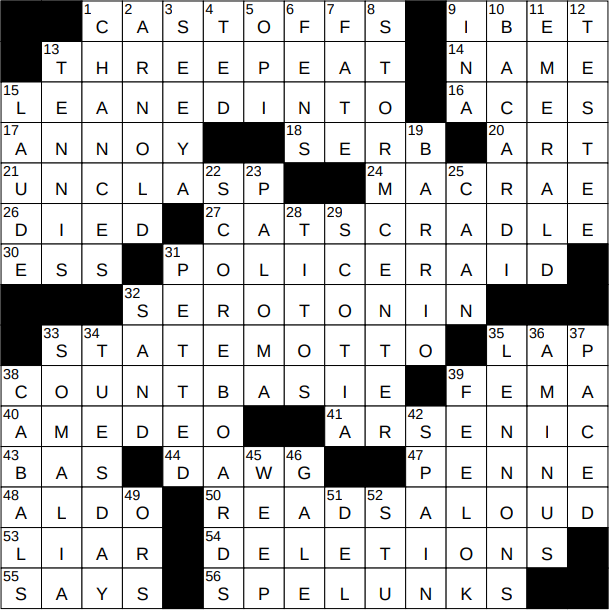 18 About one in three residents of Bosnia : SERB

Bosnia and Herzegovina was one of six federal units in former Yugoslavia that gained independence after the Yugoslav wars of the 1990s. There are three main ethnic groups in Bosnia. The largest group are the Bosniaks, the second the Bosnian Serbs, and the third the Bosnian Croats.

Gordon Macrae is best known for appearances in “Oklahoma!” and “Carousel“, both Rodgers and Hammerstein musicals. In both, he appeared opposite leading lady Shirley Jones. Jones and Macrae were lifelong friends, and he was the godfather of one of her sons.

Cat’s Cradle is likely to be one of the oldest games played by humans, one that sprung up independently in all parts of the world. The game is played by two people and involves the making of a series of figures with a loop of string held by the fingers.

Most of the body’s serotonin is found in the gut, where it regulates intestinal muscle movement. The balance is manufactured in specialized nerve tissue and has various functions such as regulation of mood, sleep and appetite.

The distance around a newer running track is 400 meters, as measured in the inside lane. Tracks used to be 440 yards around, so that four laps added up to an even mile (1,760 yards). As race distances changed to meters, the mile race was dropped in favor of the “metric mile”, 1600 meters, which is equivalent to 1,750 yards or 0.994 miles.

“Count” Basie’s real given name was “William”. Count Basie perhaps picked up his love for the piano from his mother, who played and gave him his first lessons. Basie’s first paying job as a musician was in a movie theater, where he learned to improvise a suitable accompaniment for the silent movies that were being shown. Basie was given the nickname “Count” as he became lauded as one of the so-called “Jazz royalty”. Others so honored are Nat “King” Cole and Duke Ellington.

Amedeo Modigliani was an Italian painter and sculptor who spent most of working life in France. Modigliani’s sculpture called “Tête” is an elongated female head made from limestone that he created between 1910 and 1912. The piece was acquired in auction in 2010 for almost $55 million, making it the fifth-most expensive sculpture ever sold.

Arsenic is element #33 in the periodic table, and has the chemical symbol “As”. Because of arsenic’s toxicity, it was very commonly used in pesticides. These compounds are getting banned over time, but it seems there is a long way to go. Arsenic in aquifers continues to be a problem around the world, including here in the US. China has introduced limits to the amounts of arsenic permitted in food as well as water, mainly as the Chinese staple of rice is particularly effective at accumulating arsenic from groundwater.

Deputy Dawg is a cartoon character in the Terrytoon television series. Deputy Dawg is a deputy sheriff in the State of Mississippi. I remember him well as my parents put curtains on the windows in our bedroom when we were very young, curtains which featured the characters Deputy Dawg and Yogi Bear.

47 The pasta in rasta pasta : PENNE

“Father Ted” is a British sitcom about three priests living on a remote island off the west coast of Ireland. There have been a couple of attempts to remake “Father Ted” for the American market. Let’s hope the project works out one day …

10 Spirits company with a bat in its logo : BACARDI

The Bacardi company is still family-owned and operated, and is based in Hamilton, Bermuda. The company was founded in Santiago de Cuba and became successful by selling a refined form of rum, something new to a market that was used to a crude, dark rum. The Bacardi family opposed the Castro regime as it came to power, so the company had to relocate to Bermuda.

13 You’d prefer to have service in it : TENNIS

Our modern sport of tennis evolved from the much older racquet sport known as real tennis. Originally just called “tennis”, the older game was labeled “real tennis” when the modern version began to hold sway. Real tennis is played in a closed court, with the ball frequently bounced off the walls.

The paloma is a cocktail made from tequila, lime juice and grapefruit soda. The name “paloma” translates from Spanish as “dove”.

James Caan was an actor from the Bronx, New York City. He was noted for his appearances in some very big movies such as “The Godfather”, “Misery”, “A Bridge Too Far”, “Rollerball” and more recently “Elf”. Caan was quite the sportsman. He played golf with an 8 handicap, and was a 6-Dan Black Belt Master of Gosoku Karate.

Tito’s Vodka is a brand that was founded in Austin, Texas in 1997 by Bert “Tito” Beveridge. Yes, Beveridge became a beverage maker …

33 Tip of a geographic horn : SOMALIA

Super Tuesday happens in February or March of a presidential election year. It is that Tuesday in which the greatest number of states hold primaries that will select delegates to be dispatched to the national conventions. Super Tuesday has become more significant over the past couple of decades as more and more states hold their primaries early in the cycle in order to increase the importance of the votes from the state.

The Lennon sisters are a singing group from Los Angeles who appeared regularly on “The Lawrence Welk Show”. They had their debut on the show in 1955, and are still singing together today (although the lineup has changed over the decades).

A coterie is a small group of friends who hang out together, and often share a common interest. The term comes to us from French, in which language a coterie was an organization of peasants all of whom held land owned by the same feudal lord.

A gale is a very strong wind, one defined by the Beaufort scale as having wind speeds from 50 to just over 100 kilometers per hour.