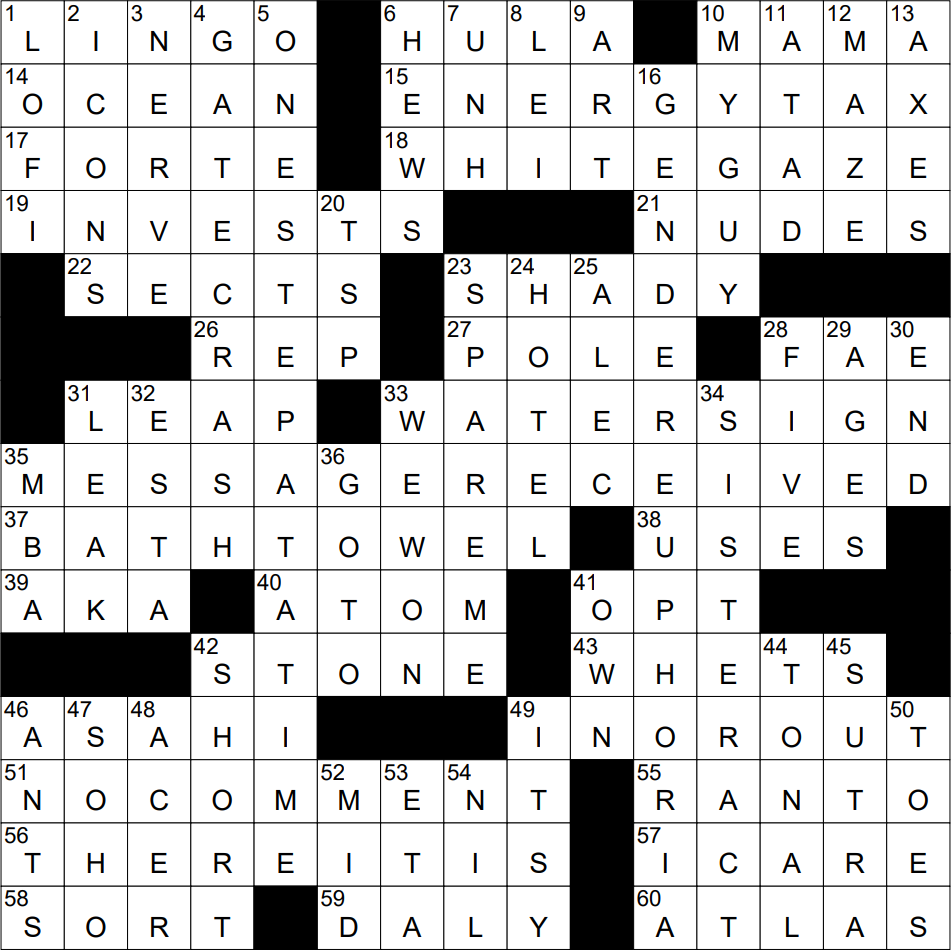 A person’s forte is his or her strength. The term “forte” came into English via French from the Latin “fortis” meaning strong. “Forte” (F) is also a musical direction meaning “loud”.

21 Some sculptures and sexts : NUDES

31 Something not to look after? : LEAP

Look before you leap.

Each of the twelve astrological signs is associated with one of the classical elements:

“Megan Thee Stallion” is the stage name of rapper Megan Pete. Pete’s mother Holly Thomas was also a rap performer, one using the stage name “Holly-Wood”. Thomas would bring Megan to recording sessions rather than put her in daycare, and so exposed her young daughter to the recording business at an early age.

We used pounds and stones in Ireland, for all my life there. However, such measures no longer have any “official” status in the country, as the Irish made the conversion to the metric system. Having said that, many folks still tend to measure body weight in stones and pounds. One stone is equal to fourteen pounds.

Actress Tyne Daly really came into the public eye playing Detective Lacey in “Cagney and Lacey”. From 1999 to 2005, Daly played the mother of the title character in the TV show “Judging Amy”.

60 Book that becomes a synonym for “Finally!” when “t” is added to the end : ATLAS

An atlas, at last!

Hi-fi systems were introduced in the late 1940s. They are pieces of audio equipment designed to give a much higher quality reproduction of sound than cheaper systems available up to that point. “Hi-fi” stands for “high fidelity”.

Graffiti is the plural of “graffito”, the Italian for “scribbling”. The word was first used to describe ancient inscriptions on the walls in the ruins of Pompeii.

16 Joy that might come from being aligned in one’s body : GENDER EUPHORIA

The word “cartoon” was originally used for a “drawing on strong paper”, a durable drawing used as a model for a work of art. The term comes from the French word “carton” meaning “heavy paper, pasteboard”. Cartoons have been around a long time, with some of the most famous having been drawn by Leonardo da Vinci.

34 Movie whose sequel was subtitled “Back in the Habit” : SISTER ACT

The 1992 comedy “Sister Act” stars Whoopi Goldberg as a lounge singer from Reno who hides out in a San Francisco convent disguised as a nun. It’s a funny, funny film.

35 Aid in getting a job in marketing, in brief : MBA

There are more speakers of the Navajo (also “Navaho”) language than any other Native American language north of the US-Mexico border. Famously, the Navajo language was used by the “code talkers” in the Pacific Theater during WWII to send secure communications by radio. These Navajo “coded” messages were used in fast tactical communications, with one bilingual Navajo speaker talking over the radio to another speaker, and the two acting as translators at either end of the conversation. The Navajo code was never broken by the Japanese.

Sichuan (also “Szechuan”) is a province in southwest China. It is noted for its cuisine, which is hot and spicy as it uses plenty of garlic, chili peppers and the Sichuan peppercorn. A famous Szechuan dish in the US is Kung Pao chicken or shrimp.

A midwife is someone trained to assist women in childbirth. The term comes from Middle English “mid wif” meaning “with woman”.

“Bagel” is a slang term for “zero”, because a bagel has the shape of the number 0.