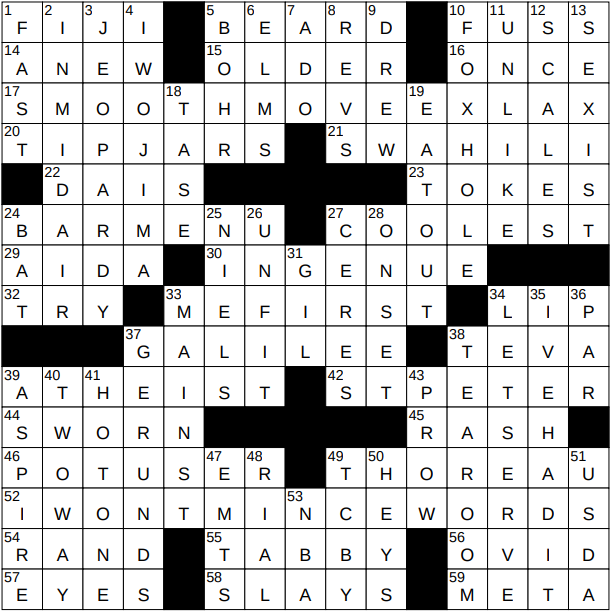 The national flag of Fiji was adopted during the state’s colonial period, and has not been changed since the nation achieved independence from Britain in 1970. It comprises a Union Jack and a shield from Fiji’s coat of arms, all on a light blue background.

17 Putdown to a klutz, in dated slang : SMOOTH MOVE, EX-LAX

Ex-Lax is a brand of laxative. That should get you going …

21 From which we get “Hakuna matata” : SWAHILI

“Hakuna matata” is a Swahili phrase, with a literal translation of “there are no worries”, or more colloquially perhaps, “no problem”. The phrase is used as the title for a hit song from the musical “The Lion King”.

The Jordan River forms the border between the nations of Israel and Jordan, and flows into the Dead Sea. According to the Christian Bible, Jesus was baptized in the Jordan by John the Baptist. The country of Jordan takes its name from the river.

39 One in a state of disbelief : ATHEIST

49 He wrote “All good things are wild and free” : THOREAU

Henry David Thoreau is a personal hero of mine. He is best known for his book called “Walden” published in 1854. The book outlines his philosophy of life and details his experiences living in a cabin near Walden Pond just outside Concord, Massachusetts.

The philosophy of objectivism comes in several forms, all holding that reality is objective and independent of the mind. The emphasis is on reality based on the observation of objects and events rather than feelings or thoughts that grow out of literature or art.

57 They move around in orbits : EYES

The orbits are the eye sockets in the skull.

59 Like casting Michael Keaton in “Birdman” as an actor who used to play a superhero : META

“Birdman or (The Unexpected Virtue of Ignorance)” is a 2014 film that was an incredible critical success. The title character was played by Michael Keaton. I know I am in the minority, but I really did not enjoy “Birdman” …

3 What makes you question everything you know? : JEOPARDY!

A foxhole, as one might expect, is another name for a fox’s den. Starting in WWI the term was used to describe a shallow pit dug by a soldier to provide quick-and-dirty protection from gunfire.

Ceres is the smallest dwarf planet in our solar system. It was discovered in 1801 and is the largest body in the asteroid belt, and is the only asteroid that is classified as a dwarf planet. For fifty years, Ceres was classified as the eighth planet circling our sun. The Dawn space probe launched by NASA entered Ceres orbit in March 2015, and became the first mission to study a dwarf planet at close range.

Gil Evans was a jazz musician who collaborated with Miles Davis.

The rial is the currency of Oman (as well as Yemen, Iran and Tunisia). Generally, there are 1,000 baisa in one rial.

The Los Angeles Lakers (LAL) basketball team started out in 1947 in Minneapolis, Minnesota. The team chose the Lakers name in honor of the nickname of Minnesota, “Land of 10,000 Lakes”. The Lakers moved to Los Angeles in 1960.

The Los Angeles Clippers NBA team started off life as the Buffalo Braves in 1970. The Braves took on the Clippers name when the franchise moved to San Diego in 1978. The new team name was chosen in honor of the great clipper ships that used to pass through San Diego Bay. The San Diego Clippers were sold in 1982 to real estate developer Donald Sterling, who moved the team to his native Los Angeles two years later. That move was not approved by the NBA, which resulted in a lawsuit and a $6 million fine, but the team was allowed to stay in its new home.

The NBA’s Brooklyn Nets were the New Jersey Nets until 2012, and were based in Newark. Prior to 1977, the team was known as the New York Nets and played in various locations on Long Island. Ten years earlier, the Nets were called the New Jersey Americans and were headquartered in Teaneck, New Jersey.