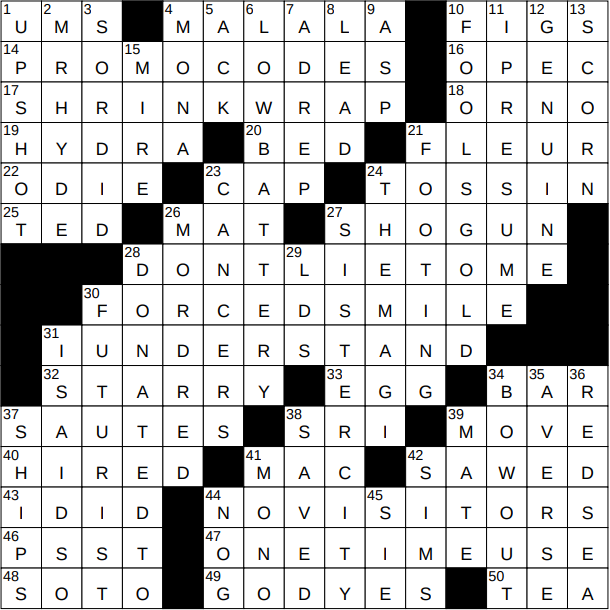 Testosterone is a primary sex hormone. It is a steroid that is secreted by the testicles in males and the ovaries in females. The levels of testosterone are 7-8 times higher in adult males than in females, and so it is often referred to as “the male sex hormone”.

The shoguns of Japan were military dictators who generally inherited their position and power. The term “shogun” can be translated as ‘general”. The position of shogun was effectively eliminated in 1867 with the demise of the Tokugawa shogunate. The modern equivalent of a shogun in Japan is a prime minister.

Sanskrit is an Indo-Aryan language and one of the 22 scheduled languages of India. It has a rich tradition and is the language in which many historical and religious texts are written. There aren’t many speakers of the language today although efforts are underway to revive spoken Sanskrit.

47 What Kleenexes are created for : ONE-TIME USE

Juan Soto is a professional baseball player from Santo Domingo in the Dominican Republic. He made his MLB debut with the Washington Nationals in 2018, and in so doing became the youngest player in the majors (at 19).

Back in the 1500s, the “up shot” was the final shot in an archery match. We now use the term “upshot” to describe the end result, the conclusion.

2 Literary character who “alone, in the ranks of mankind, was pure evil” : MR HYDE

Robert Louis Stevenson’s novella “The Strange Case of Dr. Jekyll and Mr. Hyde” was published in 1886. There are many tales surrounding the writing of the story, including that the author wrote the basic tale in just three to six days, and spent a few weeks simply refining it. Allegedly, Stevenson’s use of cocaine stimulated his creative juices during those few days of writing.

Something described as louche is shady and disreputable. “Louche” is a French term meaning “squinting”. I guess the idea is that someone disreputable might squint, might avoid direct eye contact.

Pyrite is a mineral also known as iron pyrite. Famously, it has an appearance very similar to gold, so has the nickname “fool’s gold”. Pyrite does find its way into some baubles, which go by the name of marcasite jewelry.

Cancer is the fourth astrological sign of the zodiac, and is associated with the constellation named Cancer. The zodiac symbol for Cancer is the crab, and “cancer” is the Latin word for “crab”. A person born under the sign of Cancer is sometimes referred to as a Moon Child.

Barcelona is the second largest city in Spain, after the capital Madrid. It is also the largest European city that sits on the Mediterranean coast, and the capital city of the autonomous community of Catalonia.

Belfast is the capital of Northern Ireland, and an important port city. That said, much of Belfast’s success as a port is in the past. In the early 1900s, the Harland and Wolff shipyard was the world’s largest. The most famous vessel built by Harland & Wolff was the RMS Titanic. Belfast was also the largest linen producing center in the world, resulting in the city being nicknamed “Linenopolis”. More recently, Belfast is noted as home to the film studios where “Game of Thrones” was produced.

The city of Boston, Massachusetts was founded in 1630 by Puritan colonists from England. The area was eventually named for the city of Boston in Lincolnshire, England from where several of the colonists hailed.

36 It has a significant part in the Bible : RED SEA

“Sie” is a German word meaning “you”.