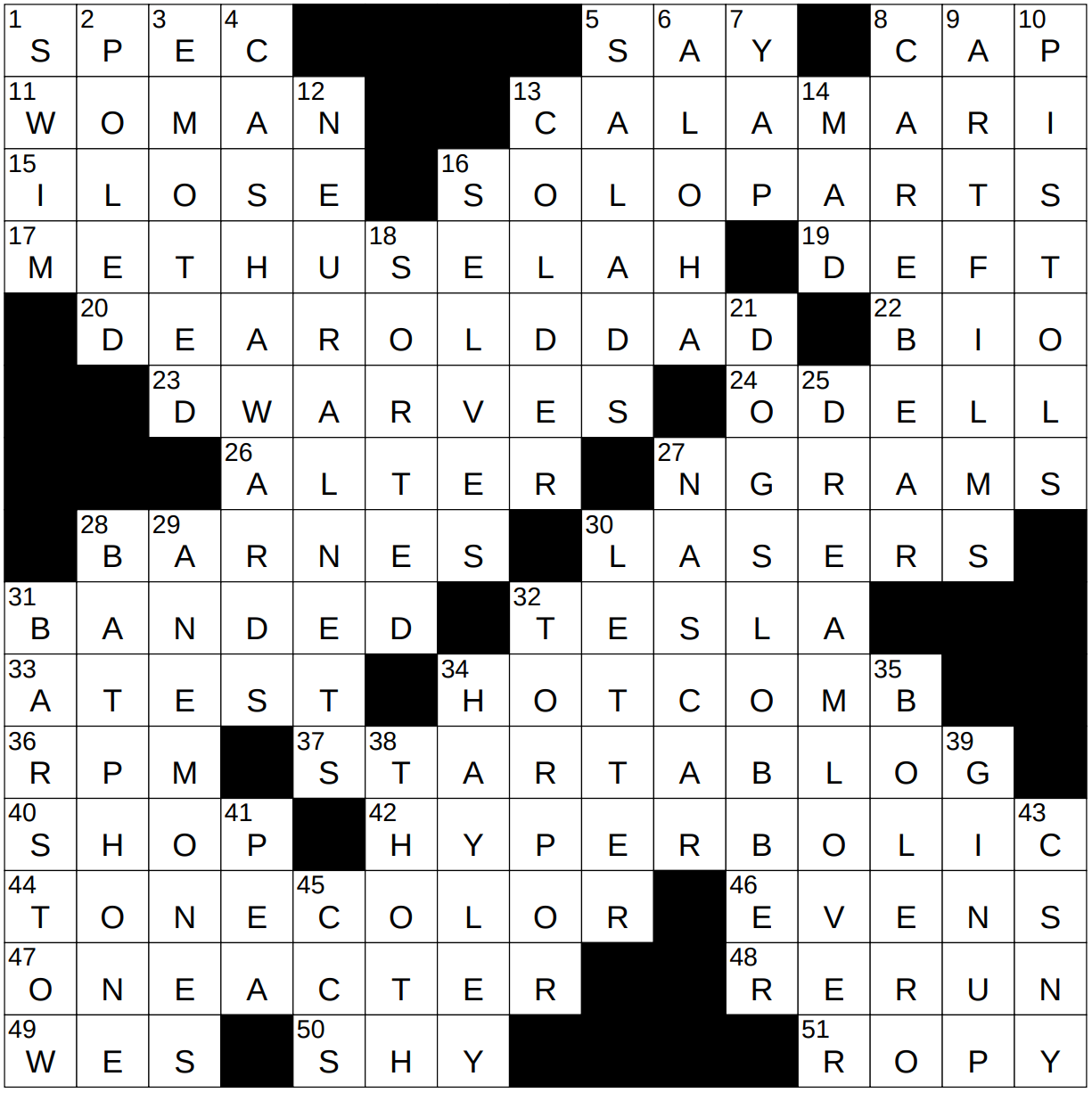 “God Is a Woman” is a 2018 song co-written and released by Ariana Grande.

13 Some rings on a plate : CALAMARI

Tchaikovsky’s “The Nutcracker” is one of the most popular ballets in the repertoire. It premiered in St. Petersburg in 1892, but its public appeal really only emerged in the late 1960s. It’s a “must-see ballet” during the Christmas holidays.

You can usually read an author’s bio on a book’s dust jacket.

30 Sources of some beams : LASERS

We use the term “protégé” for someone whose career is helped along and guided by a more experienced person, a mentor. “Protégé” is French for “protected”.

“Salomé” is an 1891, one-act play by Irishman Oscar Wilde that the playwright originally wrote in French. It tells the biblical story of Salome who requested the head of John the Baptist in return for performing the dance of the seven veils. Wilde’s work was adapted by Richard Strauss into an opera of the same name that premiered in Dresden in 1905.

To be “in the swim” (also “in the swim of things”) is to be in the thick of things, actively engaged in events.

The term “piehole” meaning “mouth” has been in use since the early 1980s. It is a variation of the older term “cake hole” that originated with the British armed forces during WWII. “Cake hole” is still used in the British Isles, with “piehole” largely limited to North America.

16 “That men may rise on stepping-stones / Of their dead ___ to higher things”: Tennyson : SELVES

25 “Someone to comfort and hold me,” in a #1 Mariah Carey hit : DREAMLOVER

27 Its participants are always tired : NASCAR

The name “anemone” means “daughter of the wind” in Greek, and at one time it was believed that the wind was what actually caused the flower to bloom.

The Ranunculus genus of flowering plants can also be referred to as “buttercups”. The name “buttercup” may be the result of a traditional belief that cows eat buttercups, resulting in the yellow color of butter. However, buttercups are poisonous to cows, and so they avoid them.

Barstow is a California railroad town that grew with the success of mining operations in the Mojave desert. The city is named for William Barstow Strong, who served as president of the Atchison, Topeka and Santa Fe Railway from 1881 to 1889.

The Mojave Desert in the southwest is named after the Native-American Mojave tribe. Famous locations within the boundaries of the desert are Death Valley, Las Vegas, Nevada and the ghost town of Calico, California.

The word “bolero” is used to describe slow-tempo Latin music that can be both a dance and a song.

Thoth was an ancient Egyptian god who was depicted as a man with the head of either a baboon or an ibis. He was the god of many things, including wisdom, writing, magic and the dead.

A peacoat (also “pea jacket”) is a heavy woolen outer jacket originally associated with sailors. Nowadays anyone wears them (they’re very comfortable and warm). The female equivalent of a peacoat is often called a Jackie O jacket, after Jackie Onassis.