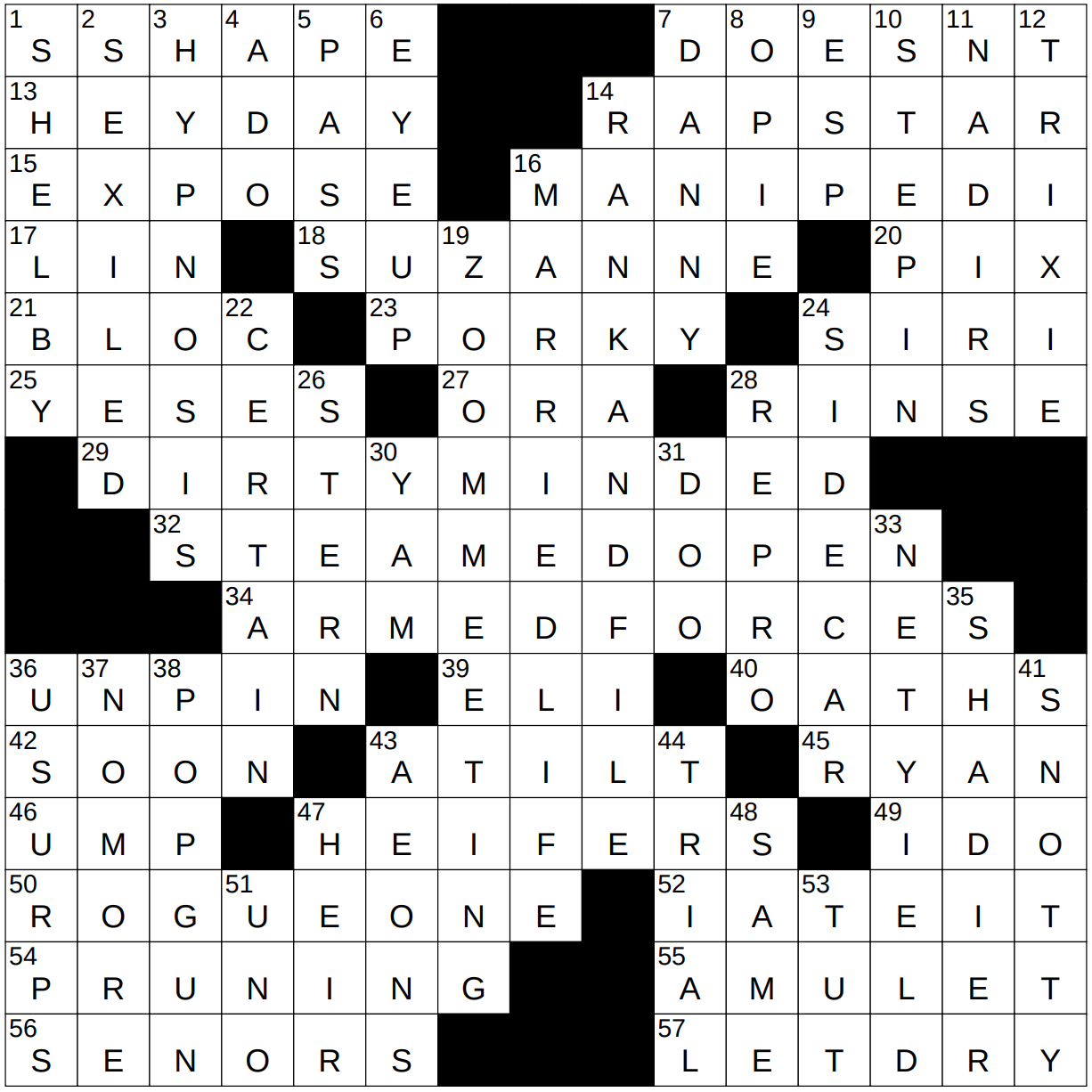 “J. Cole” is the stage name of American rap artist Jermaine Cole. Cole was born in Germany, on the US Army base in Frankfurt.

18 Somers in the hall of fame for infomercials : SUZANNE

23 Cartoon character known for bursting out of a drum : PORKY

24 Who says “I don’t have a family tree. But I have a pretty great file directory” : SIRI

“Ora pro nobis” translates from Latin as “pray for us”. It is a common phrase used in the Roman Catholic tradition and is often shortened to “OPN”.

Some argue that eating mussels grown in farms may be friendlier to the planet than following a vegan diet. Mussel farms use no land, no freshwater, no fertilizer, and even clean up the surrounding seawater.

“Corsage” is a word that we imported from French in the late 15th century. Back then it meant, believe it or not, “body size”. By the early 1800s, a corsage was a bodice, or the body of a woman’s dress. At the beginning of the 20th century, the French term “bouquet de corsage” was being used for a “bouquet worn on the bodice”, and this has been shortened simply to “corsage”.

46 One making calls from home : UMP

“Where’s the beef?” was a slogan used by the Wendy’s fast food chain in 1984. The actress most associated with the phrase was Clara Peller, who appeared in 1984 Wendy’s advertising campaign when she was 81 years of age. Famously, the phrase “Where’s the beef?” was picked up by presidential candidate Walter Mondale during the 1984 presidential campaign when he used it to argue that his rival Gary Hart had policies that lacked substance.

55 Wear it in good health : AMULET

La Mancha is a region in Spain, a plateau lying south of Madrid. The area became especially famous after the publication of the novel “Don Quixote de La Mancha” by Miguel de Cervantes.

A Hail Mary pass (also called “the long bomb”) is a desperation move in American football in which a long pass is thrown with very little chance of success, right at the end of a game or at the end of a half. The term dates back to the thirties, and was probably first used at Notre Dame. The “Hail Mary” is a prayer in the Christian tradition that is of particular significance in Roman Catholicism.

Rudyard Kipling was a British poet and writer famous for his tales of the British Raj, the rule of the British Empire in India. Kipling was actually born in Bombay, but returned with his family to England when he was very young. After being educated in England, he returned to India and from there traveled the world. Kipling’s most famous works are the stories “The Jungle Book”, “Just So Stories”, “The Man Who Would Be King”, and the poems “Mandalay”, “Gunga Din” and “If-”.

At the end of the 16th century, a group of soldiers marching in formation were divided into ranks and files. The ranks in the formation were the “horizontal” lines, and the files the “vertical” lines. The phrase “rank and file” was then used for “common soldiers”, and eventually “common people”.

The sidecar is one of my very favorite cocktails. It was invented around the end of WWI, possibly in the Ritz Hotel in Paris. It’s a simple drink to make, and contains brandy, cointreau or triple sec, and lemon or lime juice. It’s really the brandy version of a margarita (or vice versa).

“Repro” is short for “reproduction proof”, which is one of the final stages in the non-digital printing process. A repro is a fine quality proof of text and images, of high enough quality to be photographed for the making of a printing plate.

51 Game in which the object is to be the first player to score 500 points : UNO

UNO is a card game that was developed in the early seventies and that has been sold by Mattel since 1992. It falls into the shedding family of card games, meaning that the goal is to get rid of all your cards while preventing opponents from doing the same.