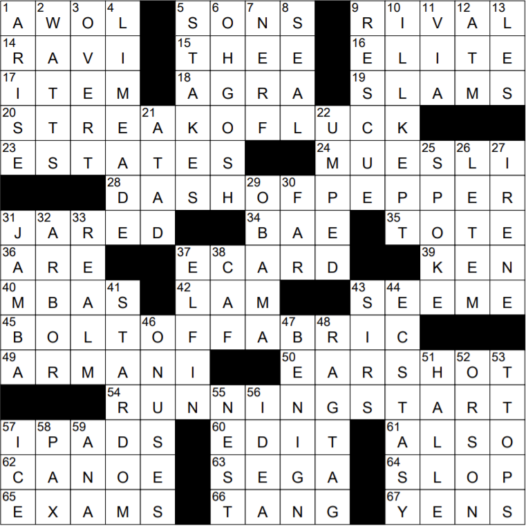 Themed answers each START with a synonym of “RUN”:

20 Hoped-for experience at a casino : STREAK OF LUCK

An entrepreneur is someone who takes on most aspects of a business venture, from the original idea to the execution. The term is imported from French, with “entreprendre” meaning “to undertake”. The original usage in English dates back to the early 1800s, when it applied to a manager and promoter of a theatrical production.

To eavesdrop is to listen in on someone else’s conversation without being invited to do so. The term comes from the practice of spies loitering in the area just outside the walls of a house, particularly in the “eavesdrip”, the ground close to a house that catches the drips of rainwater falling from the eaves of the roof.

7 Kind of ball it’s hard to hurt anyone with : NERF

22 Called strikes and balls at a game : UMPED

27 Cara who sang “Flashdance … What a Feeling” : IRENE

“Becoming” is a 2018 memoir by former First Lady Michelle Obama. After “Becoming” was published in November 2018, it took just 15 days for it to break the record for copies sold of any book in the US that year.

The Jamba Juice chain of stores was founded in 1990 in San Luis Obispo, California and now has outlets across much of the US and as far as the Philippines and South Korea.

43 Lancelot and Gawain of legend : SIRS

“Pax Romana” is Latin for “Roman Peace”. The term described a period in Roman history for the 1st and 2nd centuries AD during which the Roman Empire was ruled by Caesar Augustus. Under his control, expansionist ideas by powerful generals were held in check, and the peoples of foreign lands ruled by the Romans were relatively calm. The peace enjoyed was considered uneasy as Rome governed its conquered territories with an iron fist, and insurrection was likely at all times. The expression “pax Romana” then came to be used in English to describe any situation in which there is an uneasy peace, a peace imposed by a powerful state on a weaker state.