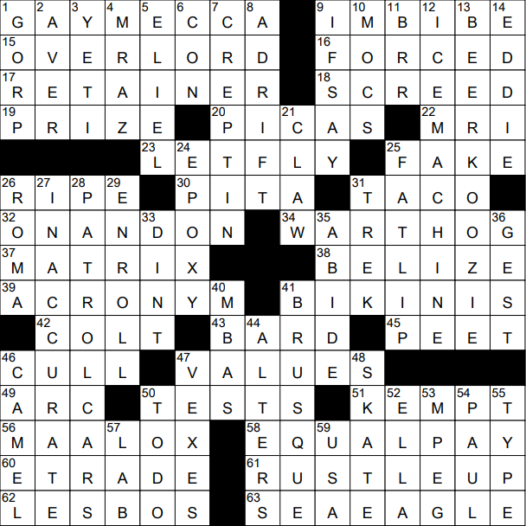 To imbibe is to drink or take in. The verb “to imbibe” ultimately comes from the Latin “in-” (into, in) and “bibere” (to drink).

37 Movie series set inside a simulated reality, with “The” : … MATRIX

38 Home to Mayan ruins like Caracol and Lamanai : BELIZE

39 Many a bill’s name in Congress : ACRONYM

The origin of the word “bikini”, describing a type of bathing suit, seems very uncertain. One story is that it is named after the Bikini Atoll, site of American A-bomb tests in the forties and fifties. The name “bikini” was chosen for the swim-wear because of the “explosive” effect it had on men who saw a woman wearing the garment …

Test matches are played between international teams in the sport of cricket, although the teams have to be ranked as “first-class” in order to play. A test match can take five days to produce a result.

Maalox is a brand of antacid that has been on sale since 1949.

60 Dot-com whose name is styled with an asterisk : E*TRADE

61 Prepare on short notice : RUSTLE UP

62 Greek locale once described as “the island of overmastering passions” : LESBOS

Eliel Saarinen was a Finnish architect who designed entire city districts in Helsinki. He immigrated to the United States where he became famous for his art nouveau designs. He was the father of Eero Saarinen, who was to become even more renowned in America for his designs, including the Dulles International Airport terminal, and the TWA building at JFK.

Epoxy resins are thermosetting polymers that have high adhesive strength. In order to achieve mechanical and adhesive strength, the epoxy has to cure. The “curing” is a cross-linking reaction that takes place between individual molecules in the material. In some cases, the cross-linking is brought about by mixing the epoxy with a co-reactant known as a “hardener”. In other cases, the epoxy is cured by exposing it to heat.

“Roma” is a 2018 drama film on which Mexican film director served as writer, co-producer, cinematographer, co-editor as well as director. It is a semi-autobiographical piece inspired by Cuarón’s early life in Mexico City’s Colonia Roma neighborhood.”Roma” won several Oscars, including Best Cinematography and Best Director for Cuarón himself.

Film director Alfonso Cuarón has been at the helm of some real blockbusters, including 2004’s “Harry Potter and the Prisoner of Azkaban” and 2013’s “Gravity”. When he won the Academy Award for Best Directing for the latter film, Cuarón became the first Mexican director to be so honored.

A dint is an effort or power, as in “make it by dint of hard work”. “By dint of” is a new expression to me, but it has been around since the early 1300s. I must have been out that day …

Our word “gest”, meaning “great deed or exploit”, has been around since about 1300 and comes from the Old French word “geste” meaning the same thing. These days, “geste” can also mean “gesture”.

41 Succinct, if nothing else : BRUSQUE

46 Leviticus calls it “unclean” and not fit for consumption : CAMEL

54 Name of six popes, including one in the 20th century : PAUL

Pope Paul VI was head of the Roman Catholic Church from 1963 to 1978. Pope Paul VI was born in the village of Concesio in Lombardy, Italy as Giovanni Battista Montini. The future pope’s mother was from a noble family, and his father was a member of the Italian parliament.