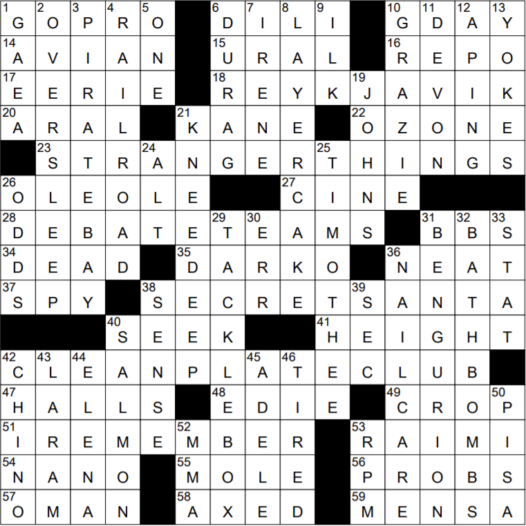 In Australia, one might say “G’day” to one’s mate/pal.

“Avis” is the Latin word for “bird”, giving rise to our adjective “avian” meaning “relating to birds”.

Reykjavik is the capital city, and indeed the only city, of Iceland. It is also the most northerly capital city of any country. It isn’t very large, relatively speaking, with a population of only 200,000 in the Greater Reykjavik Area.

The Greek word “stadion” was a measure of length, about 600 feet. The name “stadion” then came to be used for a running track of that length. That “running track” meaning led to our contemporary word “stadium” (plural “stadia”).

“Cinéma” is French for “cinema”, and is often shortened to “ciné”.

38 Activity with a drawing of names : SECRET SANTA

55 Savory sauce made with chocolate : MOLE

The main mosque in the Sultanate of Oman is the Sultan Qaboos Grand Mosque located in the capital Muscat. The mosque is relatively new in the grand scheme of things, completed in 2001. It is named for Qaboos bin Said al Said, the current Sultan of Oman. The prayer carpet on the floor of the mosque’s prayer hall took four years to complete, and is the second-largest hand-woven carpet in the world (the largest is in the Abu Dhabi mosque).

Hip-hoppers might wear do-rags (also “durags”) today, but they have been around for centuries. The etymology of “do-rag” is pretty evident, i.e. a piece of cloth (rag) to hold a hairstyle (do) in place.

Along with her husband Frederick, Irene Joliot-Curie was awarded the Nobel Prize for chemistry in 1935 for their discovery of artificial radioactivity. Irene was the daughter of Marie and Pierre Curie, who also won Nobel Prizes. Irene died when she was 58 years old, suffering from leukemia brought on by her exposure to high doses of radiation. Her mother, Marie, died from aplastic anemia, also caused by high exposure to radiation. To this day, Marie’s personal papers are kept preserved in lead-lined boxes as they are highly radioactive, even her personal cookbook.

Plymouth is a port city on the coast of Devon in the UK. Famously, it was the point of departure for the Mayflower Pilgrims. The city sits at the mouth of the River Plym, hence the name “Plymouth”.

Ben Gurion International (TLV) is Israel’s main airport, and is located in the city of Lod just a few miles southeast of Tel Aviv. The airport is named for David Ben-Gurion, Israel’s first prime minister.

45 First person to appear simultaneously on the American and British covers of Vogue (Oct. 2021) : ADELE

50 Site of a famous tilt in European history : PISA

52 Sport with a big pay-per-view audience, in brief : MMA