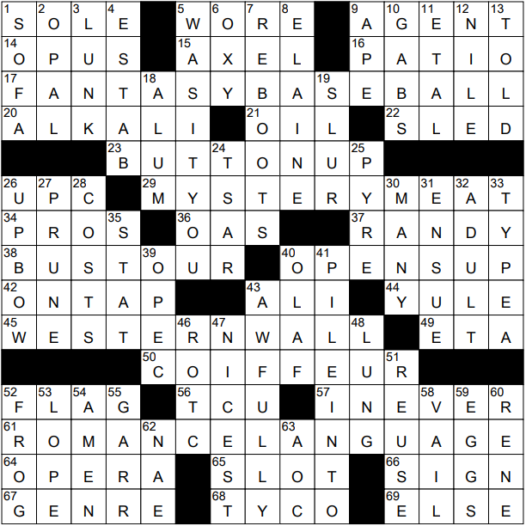 Themed answers each start with a GENRE found in a bookstore:

26 What a grocery scanner scans, for short : UPC

36 Grp. that extends from Canada to Chile : OAS

The Organization of American States (OAS) was founded in 1948, and has its headquarters in Washington, D.C. Not all of the independent states in the Americas are members. Cuba was barred from participation in the organization after a vote in 1962. Honduras had her membership suspended after the country’s 2009 coup.

The Western Wall (also called “the Wailing Wall”) is a remnant of an ancient wall that surrounded the Jewish Temple in Jerusalem. The wall is a sacred site for the faithful, and has been a place for prayer and pilgrimage for centuries. The term “Wailing” was assigned in English as many Jewish people came to the site to mourn the destruction of the Temple.

“Coiffure” is a French word that we’ve imported into English meaning “hairstyle”. The term comes from the Old French word “coife”, which was used for the inner part of a helmet.

Texas Christian University (TCU) is a private school in Fort Worth, Texas. TCU used to be called AddRan Male & Female, named after AddRan Clark, the son of Addison Clark who died at the age of 3-years-old from diphtheria. Poor young AddRan was named after his father and his brother, Addison and Randolph.

The Tyco brand of toys was founded in 1926 as Mantua Metal Products by John Tyler. The first products made were scale model trains using die-cast metal. The company introduced the Tyco brand in the fifties, with “Tyco” standing for “Tyler Company”.

7 Starts up again, as a computer : REBOOTS

8 Pal of Jerry on “Seinfeld” : ELAINE

9 Primate with no tail : APE

12 River on which Cleopatra cruised : NILE

“Queen of the Nile” is a common description used for Cleopatra VII of Egypt. Cleopatra was the last pharaoh to rule the country. After she died, Egypt became a province in the Roman Empire.

39 Intl. group that has no members in Europe or North America : OPEC

Belgian artist René Magritte was a surrealist. His most recognized work may be “The Son of Man”, a painting he created as a self-portrait. It is the work that shows a man in a bowler hat with his face covered by an apple. The image features prominently in a great movie, the 1999 remake of “The Thomas Crown Affair”.