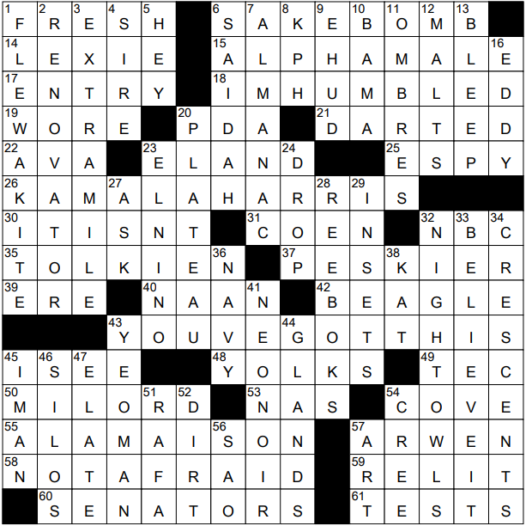 20 Exhibition that might attract eye rolls, for short : PDA

The eland (plural “eland, elands”) is a large African antelope, in fact the largest antelope on the planet. Both male and female eland have horns, and those horns have a steady spiral ridge along their length.

The Serengeti is a region in Africa located in northern Tanzania and southwest Kenya. The name “Serengeti” comes from the Maasai language and means “Endless Plains”.

35 Author who referred to his works as a “legendarium” : TOLKIEN

42 Ship on which Darwin collected material for “On the Origin of Species” : BEAGLE

“Gumshoe” is a slang word used for a private detective or private investigator (P.I.). Apparently the term dates back to the early 1900s, and refers to the rubber-soled shoes popular with private detectives at that time.

57 Daughter of Elrond in “The Lord of the Rings” : ARWEN

Arwen Undómiel is a character in J. R. R. Tolkien’s “The Lord of the Rings”. In the movie adaptations by Peter Jackson, Arwen is played by actress Liv Tyler.

4 Part of an equine bloodline : SIRE

The Equus genus of animals includes horses, asses and zebras.

10 Foe of the Fighting Tigers : BAMA

The adjective “ombré” describes a color or tone that is a blend of one into another. “Ombré” is French for “shaded”. A softer and more gradual shading of one color into the other is referred to as “sombré”.

The musical “Cabaret” is based on “I Am a Camera”, a 1951 play written by John Van Druten. In turn, the play was adapted from a novel “Goodbye to Berlin” written by Christopher Isherwood. The action in the musical takes place in the 1930s, in a seedy Berlin cabaret called the Kit Kat Klub. “Cabaret” is a great stage musical, although the 1972 film of the musical isn’t one of my favorites.

“The Dark Knight” is a 2008 film featuring Christian Bale as Batman, the title character. The movie is the second in what’s now known as “The Dark Knight Trilogy” (after “Batman Begins” and before “The Dark Knight Rises”. Christopher Nolan directed all three films in the trilogy.