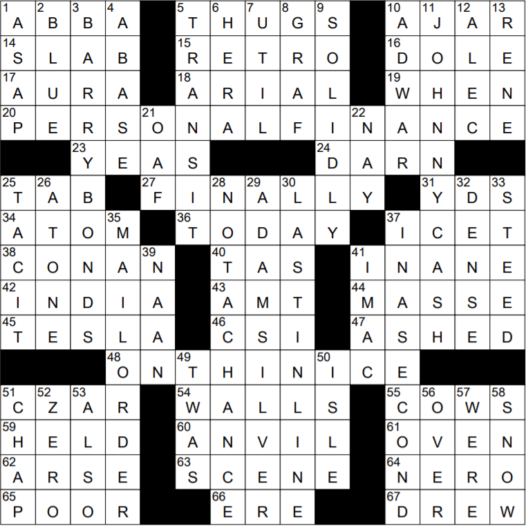 Themed answers each end with a sort of investment encountered in PERSONAL FINANCE:

5 Toughs … or an anagram of TOUGHS minus a letter : THUGS

James Dole lent his name to today’s Dole Food Company. He was known as the Pineapple King, as he developed the pineapple industry in Hawaii and founded the Hawaiian Pineapple Company, the forerunner to the Dole Food Company. Dole might have had some help on the way, as he was a cousin of Sanford B, Dole, President of the Republic of Hawaii from 1894 to 1900.

To indent a line of text is to move it to the right (assuming one is writing in English).

42 Where chess is believed to have originated : INDIA

In billiards, a massé shot is one in which the cue ball makes an extreme curve due to the player imparting heavy spin on the ball with his or her cue held relatively vertically. Some pool halls don’t allow massé shots as there’s a risk of ripping the cloth covering the table.

45 Car company that shares its name with an inventor : TESLA

The Great Fire of Rome raged for five and a half days in 64 AD. Of the fourteen districts of Rome, three were completely destroyed and seven more suffered serious damage. The emperor at the time was Nero, although reports that he fiddled, played his lyre or sang while the city burned; those accounts are probably not true. In fact, Nero was staying outside of Rome when the fire started and rushed home upon hearing the news. He organized a massive relief effort, throwing open his own home to give shelter to many of the citizens who were left living on the street.

“Cola Wars” is a phrase used to describe the competing marketing campaigns of Coca-Cola and PepsiCo. Coke is winning …

11 Singer profiled in the biopic “Walk the Line” : JOHNNY CASH

I must admit that I am not a big country music fan, but who doesn’t love Johnny Cash? The man had such a unique voice, and indeed unique songs. I think that his biopic, “Walk the Line”, is very cool, as is the title song itself. Recorded back in 1956, “Walk the Line” is relatively creative for “popular” music. The basic rhythm of the song emulates the sound of a freight train, the “boom-chicka-boom” sound. Cash’s guitar has a unique tone to it as it plays this rhythm, achieved by threading a piece of paper between the guitar strings giving the rhythm a bit of a “buzz”. Above the rhythm line, each of the five verses is sung in different keys. You can actually hear Cash hum a note signifying the key change at the start of each verse. With all these modulations, the final verse is sung a full octave lower than the first. A remarkable tune …

Adam Silver was appointed NBA commissioner in 2014. He had served in various posts with the league since 1992, and took over as commissioner on the retirement of David Stern.