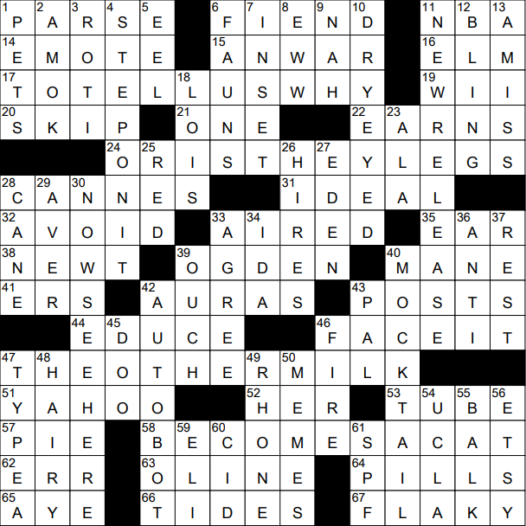 Themed answers are the last words in OGDEN Nash poems cited in the corresponding clues:

11 Org. for Pistons and Rockets : NBA

Candy
Is dandy
But liquor
Is quicker

40 Long part of a horse, short part of a giraffe : MANE

The giraffe is the tallest terrestrial animal on the planet. Its main source of food is acacia leaves that they eat from high, high up in trees, where other herbivores cannot reach.

To educe is to draw out, although the term can also have a meaning similar to “deduce”.

51 Alternative to Google or AOL : YAHOO!

5 Fish that may have only vestigial fins : EEL

We use the word “vestige” for a trace, mark or sign. The term comes from the Latin “vestigium” that also means “trace” as well as “footprint”.

6 Mr. Tumnus in the “Narnia” books and others : FAUNS

In the “Narnia” series of books, Mr. Tumnus is a faun, i.e. half-man and half-goat. According to author C.S. Lewis, the whole idea for the “Narnia” stories was born from a single image that he had of a faun carrying parcels and an umbrella through a snowy wood. And that’s just what Lucy sees when she first steps into Narnia via the famous wardrobe.

Bling-bling (often simply “bling”) is the name given to all the shiny stuff sported by rap stars in particular i.e. the jewelry, watches, metallic cell phones, even gold caps on the teeth. The term comes from the supposed “bling” sound caused by light striking a shiny metal surface.

Lois Lowry is a writer of children’s fiction. Lowry doesn’t stick to “safe” material in her books, and has dealt with difficult subjects such as racism, murder and the Holocaust. Two of her books won the Newbery Medal: “Number the Stars” (1990) and “The Giver” (1993).

The original drink called a Shirley Temple was made with two parts ginger ale, one part orange juice and a dash of grenadine. The contemporary drink is much simpler, and comprises 7up (or equivalent) with a little grenadine. A variant of the non-alcoholic original that includes some form of booze is often called a “Dirty Shirley”.

59 One of the Manning brothers : ELI