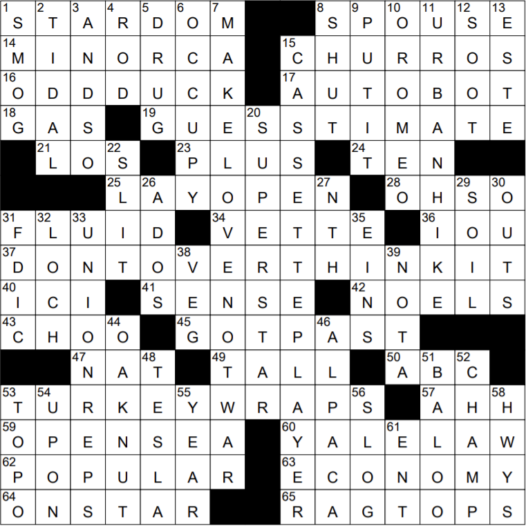 14 One of the Balearic Islands : MINORCA

17 Life-form led by Optimus Prime in the “Transformers” movies : AUTOBOT

42 Airs during the holidays : NOELS

The OnStar system was developed as a joint venture between GM, EDS and Hughes. The product itself was launched in 1996. Today, OnStar is only available on GM cars, although it used to be offered on other makes of car through a licensing agreement. OnStar is a subscription service that packages vehicle security, telephone, satellite navigation and remote diagnostics.

The Occupy movement is a protest directed against economic and social inequality worldwide. The first such protest to garner major attention took place in Wall Street in 2011, and from there similar protests spread around the world.

A barricade is an obstruction placed across some form of passage that is designed to prevent the advance of an enemy. The term “barricade” comes from the Spanish “barrica” meaning “barrel”, which possibly is a reference to the 1588 Huguenot riots in Paris. Rioters set up barriers in the streets made from barrels filled with earth and stones.

Asunción is the capital city of Paraguay. It is one of the oldest cities in South America, and hence known as “Mother of Cities”. The city was first visited by Spanish conqueror Juan de Ayolas, and he founded a fort there in 1537 that he called Nuestra Señora Santa María de la Asunción, which is why we use the current name.

“Jesus Christ Superstar” is a rock opera that was first released in album form in 1970, before being adapted for the stage in 1971. The music was composed by Andrew Lloyd Weber and the lyrics by Tim Rice.

During the Great Depression, President Franklin D. Roosevelt signed into law the Banking Act of 1933. The legislation established the Federal Deposit Insurance Corporation (FDIC), intended to be a temporary government corporation that provided insurance on deposits made by customers of qualified financial institutions. The first accounts to be covered, in 1934, had an insurance limit of $2,500. Since the financial crisis of 2008, that limit is $250,000.

“Firth” is a word used in England and Scotland for an inlet. It tends to be used in the same way as “fjord” is in Scandinavia.

In German, “zwölf minus elf” (twelve minus eleven) is “eins” (one).

44 Acorn, by another name : OAKNUT

Tesla’s Cybertruck is an electric-powered pickup truck that the company unveiled in 2019. It’s a pretty futuristic design, one inspired by the flying cars in “Blade Runner” and the automobile/submarine Lotus Esprit in “The Spy Who Loved Me”.