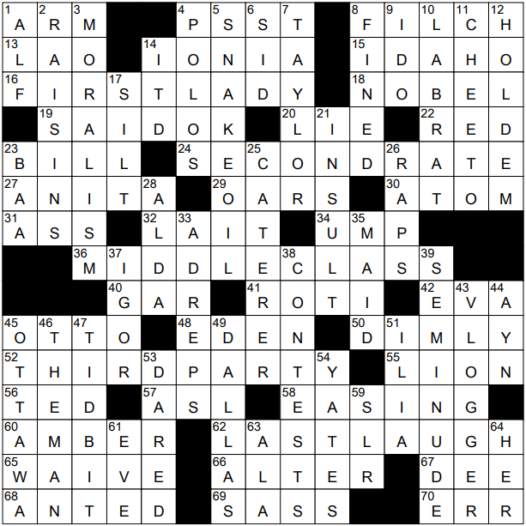 Today’s Theme (according to Bill) One Out of Three

Themed clues are lists of three things. Themed answers are common phrases suggested by the position of one of the things in the list:

“Filch” is a slang word meaning “steal”. One suggestion is that the term derives from the German “filzen” meaning “comb through”.

The geographic region called Ionia is located in present-day Turkey. Ionia was prominent in the days of ancient Greece, although it wasn’t a unified state and rather a collection of tribes. The tribal confederacy was more based on religious and cultural similarities than a political or military alliance. Nowadays we often refer to this arrangement as the Ionian League.

15 Where the Nez Percé Reservation is found : IDAHO

The Nez Percé nation of the Pacific Northwest call themselves the Nimiipuu, meaning “The Real People”. The name “Nez Percé” means “pierced nose” in French (nez percé), a name applied in error to the Nimiipuu instead of the neighboring Chinook tribe, who did in fact practice nose-piercing.

“Baloney” is an American English variant of “Bologna” as in the sausage. The term came to be used to mean “nonsense” in the 1920s. “Baloney” was popularized in the 1930s by New York Governor Alfred E. Smith as he used the term quite often.

Christian Louboutin is a fashion designer from Paris who is known for creating stiletto shoes with trademark, red-lacquered soles. His biggest individual client is American author Danielle Steel, who is said to own more that 6,000 pairs of Louboutin shoes!

Anita Baker is an R&B and soul singer who was raised in Detroit, Michigan. Baker’s most successful song is the Grammy-winning “Sweet Love” that was released in 1986.

30 Its name comes from the Greek for “uncuttable” : ATOM

Atomism is a philosophical concept based on the idea that the physical world is composed of atoms, indivisible fundamental units, pieces of matter. The term “atom” comes from the Greek “a-” (not) and “tomos” (cutting), giving the “atomos” meaning “uncut, indivisible”. The pioneers of ancient Greek atomism were Leucippus and his pupil Democritus in the 5th century BCE.

32 French word at a coffeehouse : LAIT

In French, you might pour “lait” (milk) “dans votre café” (in your coffee).

57 In which four raised fingers and a curved thumb is “B,” in brief : ASL

2 What toes can resemble after a long bath : RAISINS

11 Cause of some orange fingers : CHEETO

Cheetos snacks were developed by the same guy who created Fritos, hence the similarity in name. On the market since 1948, up until the turn of the century the name was written as “Chee-tos”. Oh, and Cheetos contain pork enzymes, so vegetarians beware!

Richard Yates was a novelist and short story writer from Yonkers, New York. The most famous of his works was his first novel “Revolutionary Road”, published in 1962.

At the beginning of the 20th century, 35mm was chosen as a standard size for film used in still cameras. 35mm was selected as it was already the standard film size used in motion pictures.