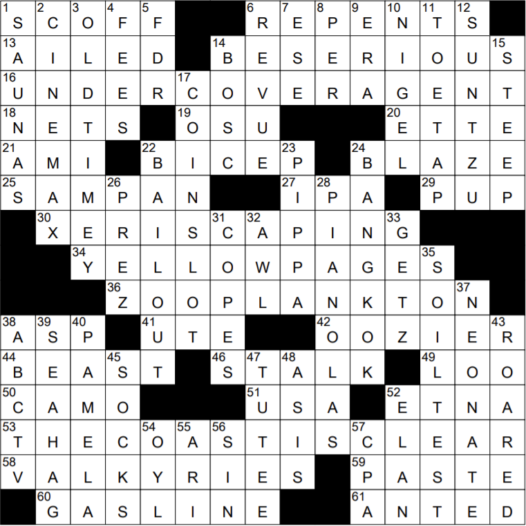 Antisthenes was a Greek philosopher, and a pupil of Socrates. He was one of the founders of the cynicism school of thought, which holds that the purpose of life is to live in virtuous harmony with nature. The name “cynic” comes from the Greek for “dog”, and that name was originally applied to the cynics as an insult.

“Guns” is a slang term for very strong arms or biceps.

A sampan is a flat-bottomed wooden boat from China. The term “sampan” means “three planks” in Cantonese, alluding to the original simple design of this flat-bottomed boat. There was one wide plank on the bottom, and two at either side forming the sides of the vessel.

30 Gardening practice that minimizes the need for water : XERISCAPING

34 The book of numbers : YELLOW PAGES

A yellow pages phone directory is a listing of business and telephone numbers. The first yellow pages directory was introduced here in the US, back in 1886. The phrase “yellow pages” has become almost ubiquitous, although some countries (like my native Ireland) use “golden pages” instead. The term lives on in the modern era, as the name of the business review website Yelp.com is a contraction of “YEL-low P-ages”.

Plankton are organisms that float in water and are incapable of swimming against a current. Plankton can be classified into four broad groups:

38 Symbol on an ancient sarcophagus : ASP

A sarcophagus is a stone or wooden box in which a body is interred. “Sarcophagus” is Greek for “flesh-eating stones”. The name was applied as a sarcophagus was often made from a kind of limestone that was believed to cause the flesh of corpses to decompose.

58 Those tending to the fallen warriors called einherjar, in myth : VALKYRIES

A collage is a piece of artwork that is made by assembling pieces of paper and objects that are glued onto paper or canvas. The term “collage” comes from the French “coller” meaning “to glue”.

5 Who famously offered this speaking advice: “Be sincere, be brief, be seated,” in brief : FDR

“Per curiam” translates from Latin literally as “by the court”. In the law, a per curiam decision is one made by a court with multiple judges, with the court acting as a whole. Most of the US Supreme Court decisions and opinions would be described as per curiam.

10 Man’s name that’s an African country if you change the last letter : NIGEL

The Republic of Niger is a landlocked country in Western Africa that gets its name from the Niger River. 80% of the country lies within the bounds of the Sahara Desert.

“The Art of War(fare)” is an ancient military text that is attributed to a high-ranking Chinese general called Sun Tzu. We even see the principles in Sun Tzu’s book applied to modern business.

In the TV show “Lost”, the plane that crashed was operated by Oceanic Airlines. The fictional airline Oceanic Airlines or Oceanic Airways turns up a lot on the big and small screen. You might spot Oceanic in the movies “Executive Decision” and “For Love of the Game”, and in episodes of the TV shows “Castle”, “Chuck”, “Flipper”, “The Goldbergs” and “The X-Files”.