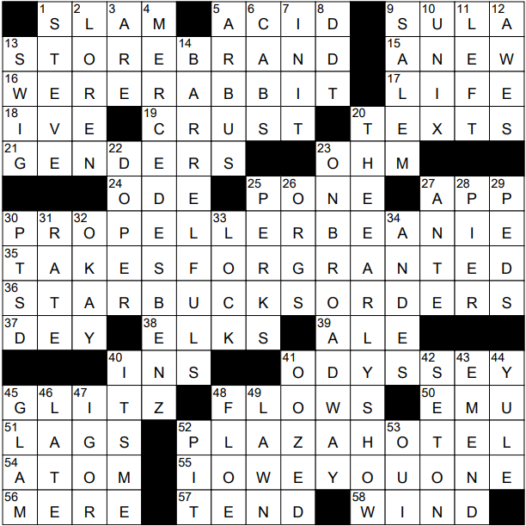 Constructed by: Brooke Husic & Will Nediger
Edited by: Will Shortz

9 Toni Morrison title character who lives in the Bottom : SULA

“Sula” is a 1973 novel by Toni Morrison. The title character is a young woman who returns to her hometown in Ohio. Sula’s return disrupts the community as she defies social norms.

16 Furry creature that Wallace becomes during the full moon, in a “Wallace & Gromit” film : WERE-RABBIT

19 Feature of the inner planets : CRUST

The inner planets of our solar system are also known as the terrestrial planets. They are Earth, Mars, Venus and Mercury. They all are dense and rocky, and are composed mainly of silicates and metals. The silicates make up the rocky crusts of the inner planets, and the metals form their cores.

23 Reciprocal of a siemens : OHM

The propeller beanie was introduced in drawings in the 1940s by high school student Ray Nelson as an emblem for fans of science fiction. Propeller beanies were embraced by comic strip artists, and eventually turned up on the head of Beany, one of the title characters in the animated cartoon series “Beany and Cecil” aired by ABC in the sixties. It’s this propeller beanie that led to our usage of the somewhat pejorative term “propellerhead” for someone who is technically able or perhaps computer savvy.

36 Grande and others : STARBUCKS ORDERS

A yard of ale is a very tall glass, one that is just under a yard (three feet) long. It holds about 60 fluid ounces of beer. I’ve tried drinking out of one, and it is extremely difficult. There is a bulb at the bottom of the glass. When you get towards the end of the drink, that bulb causes a kind of airlock and the remainder of the beer rushes to the top of the glass, splashing you in the face.

“Odyssey” is one of two epic poems from ancient Greece that are attributed to Homer. “Odyssey” is largely a sequel to Homer’s other epic “Iliad”. “Odyssey” centers on the heroic figure Odysseus, and his adventures on his journey home to Greece following the fall of Troy. We now use the term “odyssey” to describe any long series of adventures.

50 Creature whose male incubates the eggs, during which it won’t eat, drink or defecate for 50+ days : EMU

The celebrated Plaza Hotel in New York City is named for Grand Army Plaza, which faces the hotel’s main entrance on Fifth Avenue.

Diane Arbus was a photographer famous for producing black & white images of the unusual and less than savory aspects of life. The 2006 movie “Fur” presents a fictionalized account of her life and work, with Nicole Kidman playing Arbus.

Bell Labs dates back to the days of Alexander Graham Bell. The first Bell Labs building was in the carriage house of Bell’s father’s house in Washington, D.C.

30 What cognitive behavioral therapy might treat, in brief : PTSD

Seton Hall University is a private, Roman Catholic college in South Orange, New Jersey. The most famous of the school’s sports programs is men’s basketball, played by the Seton Hall Pirates.

In his native Dutch, the explorer William Barents was known as “Willem Barentsz”. Barents made three main voyages of exploration in his lifetime, all of them searching for the Northeast Passage, the route from the Atlantic into the Pacific along the Arctic coast. Barents was not successful in finding the route, but made notable discoveries including Bear Island and Spitsbergen. What is now called the Barents Sea is part of the Arctic Ocean north of Norway and Russia.

“Absolument” is French for “absolutely”.