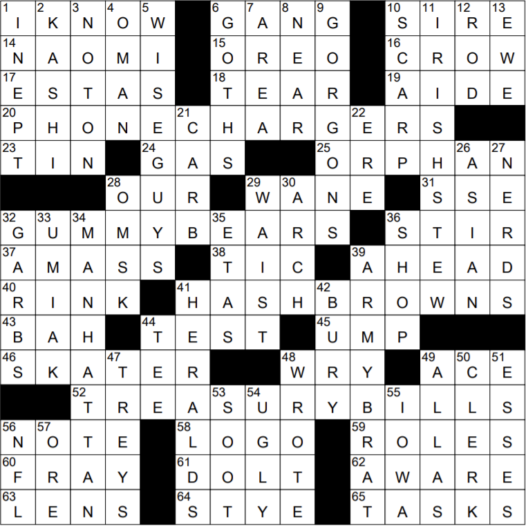 Constructed by: Fiona Taylor
Edited by: Will Shortz

Themed answers each end with an NFL team:

15 Cookie whose packaging shows a splash of milk : OREO

Nabisco offers customized packets of Oreo cookies through its OREOiD website. Users of the stie can choose filling colors and decorations, and can add a photo or a message to the cookie itself.

“Oliver Twist” is an 1838 novel by Charles Dickens. The title character is an orphan who escapes from an oppressive apprenticeship with an undertaker. He gets drawn into the criminal underworld of London, where he meets up with some colorful characters such as the Artful Dodger, Fagin and Bill Sykes. Television, stage and film adaptations of “Oliver Twist” tend to lift the overall mood of the story, which in the novel is pretty bleak.

Gummy bears were a 1920s creation of a confectioner from Bonn, Germany named Hans Riegel, Sr. They were originally sold as Dancing Bears, and back then were made from gum arabic (hence the generic name “gummy” bears). The gum arabic was eventually replaced with gelatin, which remains a key ingredient to this day.

41 Breakfast side at a diner : HASH BROWNS

58 The Cowboys’ five-pointed star or the Colts’ horseshoe : LOGO

Kashi is a food company that primarily produces breakfast cereals. Founded in 1984, the name “Kashi” is a melding of “kashruth” (i.e. kosher), and “Kushi”. Michio Kushi helped to introduce the macrobiotic diet to the US in the fifties.

4 “Toe” of the Arabian Peninsula : OMAN

In the world of calculus, the integration function calculates the area between a curve and the x-axis or y-axis.

The Gorgons were feared female creatures of Greek mythology. They were three sisters who had hair made up of living snakes. Anyone who looked at their faces would be turned to stone instantly.

A scarp is a steep slope or a line of cliffs, especially one created by erosion. An alternative name for the same feature is “escarpment”.

The exact recipe of what’s known as “Irish stew” isn’t really specific, but it does include some kind of meat and at least one root vegetable. The most common recipe calls for mutton, potatoes, onions and parsley. Believe it or not, my (very Irish) mother used to make it with bacon and sausages. Yep, boiled bacon and boiled sausages …

34 Whiskey cocktail … or where it was invented : MANHATTAN