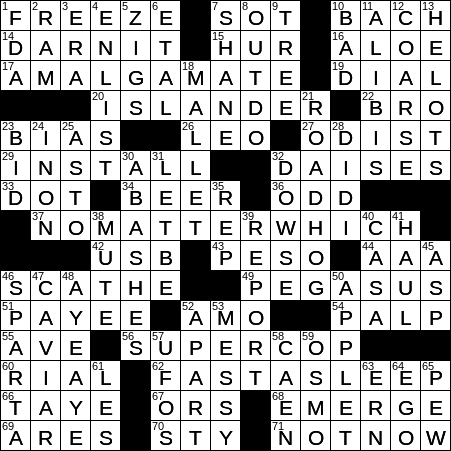 Constructed by: Kurt Weller
Edited by: Will Shortz

Themed clues make sense when we drop the letters T and W, when there’s “NO T, NO W”:

Perhaps the most famous mass in classical music is J. S. Bach’s “Mass in B minor”, which was completed just before he died. It was one of the last of Bach’s compositions, although much of the music was composed earlier in his life.

27 Percy Bysshe Shelley, for one : ODIST

32 Locales for speakers and honorees : DAISES

Samuel Adams beers (sometimes ordered as “Sam Adams”) are named in honor of the American patriot who played a role in the American Revolution and the Boston Tea Party. Samuel Adams came from a family associated with the brewing industry, mainly involved in the production of malt.

Palps are appendages found near the mouth of many invertebrates, including mollusks, crustaceans and insects. They are used to help in feeding, but can also assist in locomotion.

The last few years of actor Alan Ladd’s life were pretty rough. In 1962, he was found unconscious in a pool of blood with a bullet wound in his chest, an abortive suicide attempt. Two years later he was found dead, apparently having succumbed to an accidental overdose of drugs and sedatives. He was 50 years old.

A shoe tree (or boot tree) is an adjustable, foot-shaped device that is placed inside a shoe to preserve its shape. Shoe trees are often constructed from solid wood that absorb odor and wick away moisture from the shoe’s leather.

The helots were a population of poorly-treated slaves who served the citizens of Sparta.

“Applet” is the name given to a small application that runs within a larger computer program.

“Les Demoiselles d’Avignon” (“The Young Ladies of Avignon”) is an oil painting created by Spanish artist Pablo Picasso in 1917. The painting is generally regarded as having a profound influence on modern art and is hailed as the most important proto-Cubist work. You can go see “Les Demoiselles d’Avignon” in the Museum of Modern Art in New York City.