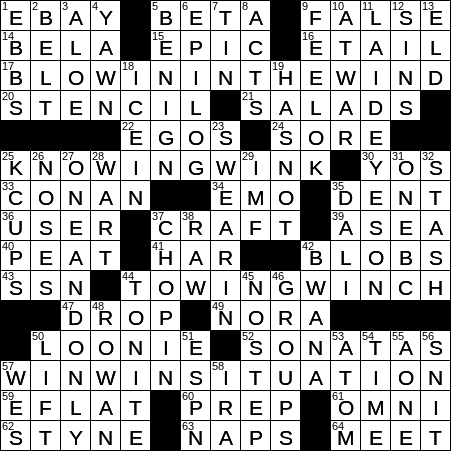 Themed answers each include the letter sequence WIN, twice:

Shopping.com is one of those comparison shopping websites. It allows you to compare prices for the same product at many different online retailers. It’s very useful for those of us who prefer online shopping to visiting a brick-and-mortar store.

5 Stage that may have bugs : BETA

The birth name of singer Bob Dylan was Robert Zimmerman. Zimmerman changed his name to “Dylan” partly because he was influenced by the poetry of Welsh poet Dylan Thomas.

43 Requirement for a background check, for short : SSN

49 Ephron who co-wrote and directed “Sleepless in Seattle” : NORA

Frédéric Chopin was a Polish composer who spent most of his life in France. He was most famous for his piano works in the Romantic style. Chopin was a sickly man and died quite young, at 39. For many of his final years he had a celebrated and tempestuous relationship with the French author George Sand (the nom de plume of the Baroness Dudevant). Those years with Sand may have been turbulent, but they were very productive in terms of musical composition.

Rowan Atkinson is an English comedian and actor who is most famous for playing the title role in the comedy shows “Mr. Bean” and “Blackadder”. In the world of movies, Atkinson had memorable supporting performances (in my opinion) in the Bond film “Never Say Never Again”, and in the romcoms “Four Weddings and a Funeral” and “Love Actually”. A very talented man …

“SportsCenter” is the flagship program of the ESPN television network, and has been on the air since 1979. Original versions of “SportsCenter” appear on multiple times during the day, so that there have been over 50,000 episodes broadcast to date, more than any other show on US television.

53 Something of little matter? : ATOM

Atomism is a philosophical concept based on the idea that the physical world is composed of atoms, indivisible fundamental units pieces of matter. The term “atom” comes from the Greek “a-” (not) and “tomos” (cutting), giving the “atomos” meaning “uncut, indivisible”. The pioneers of ancient Greek atomism were Leucippus and his pupil Democritus in the 5th century BCE.