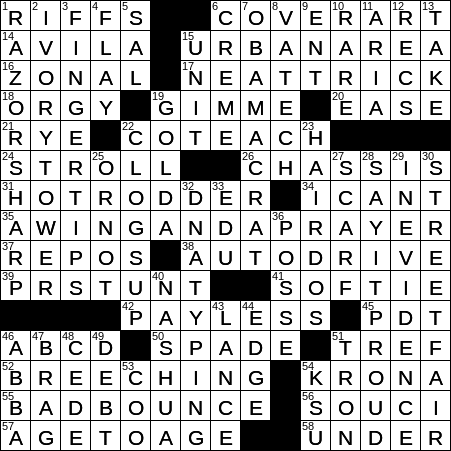 Before we used the word “chassis” for the base frame of a car, in 1903, the term applied to the carriage base of a large gun, and indeed a window frame (later “sash”), “Châssis” is French for “frame”.

35 Things relied on in desperation : A WING AND A PRAYER

The phrase “on a wing and a prayer” comes from the title of a 1943 patriotic song called “Comin’ in on a Wing and a Prayer”. The WWII song was a number one hit for the Song Spinners and tells of a damaged aircraft limping home, barely making it back to base.

Payless ShoeSource is a discount shoe store that was founded in 1956 in Topeka, Kansas.

45 In-person setting for the Emmys, but not the Oscars: Abbr. : PDT

According to Jewish dietary laws, kosher food is fit to eat, and food that is not fit to eat is referred to as treif (or “tref”). The usage of “kosher” has extended to include anything considered legitimate.

52 Going from petticoats to pants, once : BREECHING

A petticoat is an undergarment worn from the waist that goes under a skirt or dress. That said, the term “petticoat” was used in my day back in Britain and Ireland for a full-length slip. The name translates literally as “small coat” and originally described a padded coat worn by men under armor.

The króna is the currency of Iceland. Iceland is the second-least populous country with its own currency (after the Seychelles).

55 Challenge for an infielder : BAD BOUNCE

“Sans souci” is a French term that translates literally as “without worry”, so we use it to mean “carefree”.

The French term “crème fraîche” translates as “fresh cream”, although the cream itself isn’t really fresh as it is soured with a bacterial culture.

The sports teams of Virginia Tech are known as the “Hokies”. The name comes from a spirit yell that dates back to 1896:

“Nixon in China” is an opera by John Adams, with a libretto by Alice Goodman. The piece was inspired by President Nixon’s famous visit to China in 1972.

The term “hot take” is from the world of journalism, and was coined relatively recently. It describes the shabby technique of making a provocative comment about a news event, usually with the intent of encouraging angry responses from readers or listeners.

The New Hampshire city of Nashua was named for the Nashaway people who inhabited the upstream portions of the Nashua River Valley. The name “Nashaway” translates as “river with a pebbled bottom”.

Lancers (also “lancemen”) were a special type of cavalry soldier, ones who fought with lances!

“I Do, I Do, I Do, I Do, I Do” was the second of ABBA’s long, long string of smash hits. It was particularly successful in Australia, where there is a huge ABBA fan base to this day. The song was featured in a really great Australian film called “Muriel’s Wedding” from 1994. This was the movie that launched the career of the wonderful actress Toni Collette.