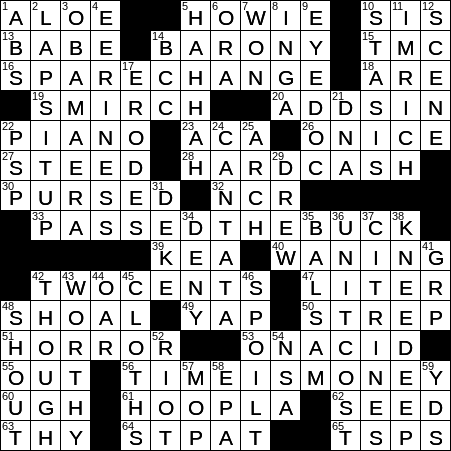 Constructed by: Francesca Goldston & Jeff Chen
Edited by: Will Shortz

Themed answers are common phrases in which the word “TIME” has been replaced by a form of MONEY, to give another common phrase:

1 Relief from the desert? : ALOE

5 Judging partner of Simon, Heidi and Sofia on “America’s Got Talent” : HOWIE

The full name of the author of “Don Quixote” was Miguel de Cervantes Saavedra. As a young man in 1570, Cervantes was a soldier fighting for the Spanish Navy, stationed in Naples, at that time a possession of Spain. He was injured in battle, receiving three gunshot wounds including two to the chest. His injuries left him without the use of his left arm. After recuperating, he returned to active service, and in 1575 he was captured by Algerian corsairs, and spent the next five years in slavery in North Africa. His parents found him and bought his freedom, and brought him home to his native Madrid.

33 *Occupied oneself : PASSED THE BUCK (from “passed the time”)

47 One of three in a double magnum bottle : LITER

The list of standard sizes for wine bottles is quite long. The main ones encountered would be:

50 Common cause of tonsillitis : STREP

Streptococcus bacteria multiply and divide along a single axis so that they form linked chains. That behavior gives the genus of bacteria its name, as “streptos” is Greek for “easily twisted, like a chain”. I had to battle with streptococcal pharyngitis (strep throat) twice in the past few years and it was not at all pleasant, I must say. Another species of streptococcus is responsible for that terrible “flesh-eating” infection that makes the news from time to time.

“It” is a 1986 horror novel penned by Stephen King. The title character is a demon who preys on children, primarily appearing in the form of Pennywise the Dancing Clown. The novel was adapted into a 1990 miniseries of the same name. I don’t do Stephen King …

53 How Lennon wrote the opening lines of “I Am the Walrus” : ON ACID

56 Benjamin Franklin adage … or a hint to interpreting the answers to the four starred clues : TIME IS MONEY

4 Atmosphere on “The Twilight Zone” : EERINESS

The iconic television series “The Twilight Zone” first aired in 1959 and then ran for 156 episodes before being pulled in 1964. “The Twilight Zone” was revived for four years in the late eighties, and was also spun-off into a movie by Steven Spielberg in 1983.

Johann Sebastian Bach died when he was 65-years-old, in 1750. He was buried in Old St. John’s Cemetery in Leipzig, and his grave went unmarked until 1894. At that time his coffin was located, removed and buried in a vault within the church. The church was destroyed in an Allied bombing raid during WWII, and so after the war the remains had to be recovered and taken to the Church of St. Thomas in Leipzig.