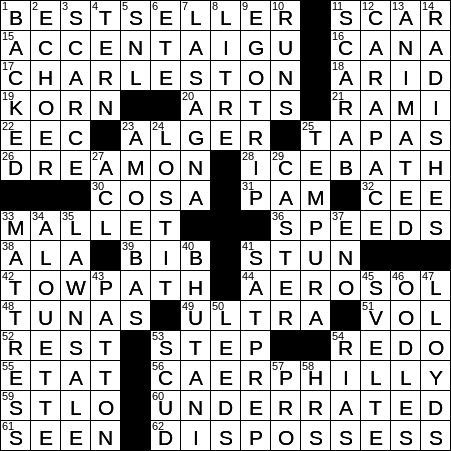 In French, accents over the letter E can be acute (é, “accent aigu”) or grave (è, “accent grave”).

16 Site of an early miracle : CANA

The Charleston developed as a dance in African-American communities, but is more closely associated today with the flappers of the 1920s.

23 Hiss at a Congressional hearing : ALGER

Alger Hiss was a US government official involved in the establishment of the United Nations. Hiss was accused of being a spy in testimony to the House Committee on Un-American Activities (HUAC) in 1948. Hiss vigorously denied and fought the accusation but eventually served over three years in jail on related charges. The consensus seems to be that Hiss was indeed a spy, but there may be new evidence available when the HUAC’s papers are unsealed in 2026.

31 Product that becomes an item to which it’s applied after shifting the last letter one spot down in the alphabet : PAM

4 Soarer by the shore : TERN

Terns are seabirds that are found all over the world. The Arctic Tern makes a very long-distance migration. One Arctic Tern that was tagged as a chick in Great Britain in the summer of 1982, was spotted in Melbourne, Australia just three months later. The bird had traveled over 14,000 miles in over those three months, an average of about 150 miles a day. Remarkable …

The terrapin is a species of turtle found in swamps in the east and south of the United States.

14 Sources of crunch for a salad : RADISHES

Radishes are edible root vegetables that are commonly grown for use in salads. Gardeners also use radishes as companion plants as the odor given off can deter pests such as aphids, ants and cucumber beetles.

23 Things on the small slide? : AMOEBAS

Tempura is a style of Japanese cuisine that features seafood, meat and vegetables that have been deep-fried in batter. The use of batter in fried foods was introduced into Japan by the Portuguese in the late 1500s.

The French-Canadian children’s song starts with, “Alouette, gentille alouette …” “Alouette” is the French word for a bird, the “lark”. The song is actually pretty gruesome, even though it was used to teach children the names of body parts. The origin of the song lies in the French colonists penchant for eating larks, which they considered to be game birds. So in the song, the singer tells the lark that he/she will pluck off one-by-one the lark’s head, nose, eyes, wings and tail.

An Angeleno is someone who lives in Los Angeles.

40 Dweller in the Himalayas : BHUTANI

41 Course for many a high schooler, in brief : SAT PREP

43 Who allegedly said “No bastard ever won a war by dying for his country” : PATTON

General George Patton was a notorious leader of US forces during WWII. He was also quite the athlete in his day. Patton placed fifth in the modern pentathlon at the 1912 Olympics in Stockholm. Most famously, he was given command of the US Third Army in 1944. That army had resounding success, liberating more territory in less time than any other army in the history of the world. Patton barely survived the war. He was killed in a car accident outside Mannheim in Germany in December of 1945.

Lloyd’s of London isn’t actually an insurance company, but rather is a market where members can get together to spread the risk associated with policies that have been underwritten.

50 European city where the first carbonated beverage was invented : LEEDS