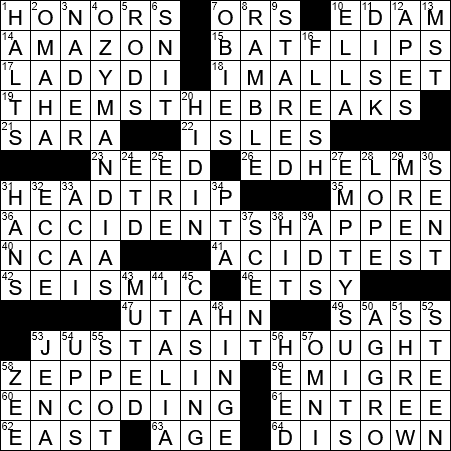 7 Where gowns are worn, for short : ORS

14 One of a tribe of mythical warriors : AMAZON

17 The People’s Princess, to the people : LADY DI

40 Inits. at the top of some brackets : NCAA

Gold is a metallic chemical element with the symbol Au. Gold is extremely unreactive. Silver and other base metals dissolve in nitric acid, and so testing an unknown sample with nitric acid can confirm the presence of gold. This assaying practise gave rise to the figurative use of the term “acid test” to describe any definitive test.

A Utahn or Utahan is someone from Utah.

The Big East collegiate athletic conference was founded in 1979. The conference went through a major realignment between 2010 and 2013 with 14 schools departing, and 15 schools joining the lineup.

2 City in which Malcolm X was born : OMAHA

3 Former presidential candidate who wrote “Only the Super-Rich Can Save Us!” : NADER

4 The “king of kings,” per a famous sonnet : OZYMANDIAS

24 A few minutes after your Lyft arrives, say : ETD