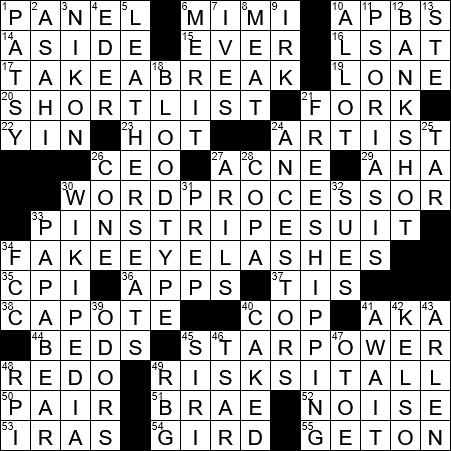 6 Only character with the same name in both “Rent” and “La Bohème” : MIMI

10 Some urgent messages, in brief : APBS

Steve Jobs certainly was a business icon in Silicon Valley. I don’t think it is too surprising to learn that the brilliant Jobs didn’t even finish his college education, dropping out of Reed College in Oregon after only one semester. Steve Jobs co-founded Apple in 1976, but in 1985 he was basically fired from his own company during the computer sales slump in the mid-eighties. Jobs then founded NeXT Computer, a company focused on supplying workstations to the higher education and business markets. Apple purchased NeXT in 1996, and that’s how Jobs found himself back with his original company.

The Consumer Price Index (CPI) measures changes in the price of services and goods purchased by households. The United States CPI fell in 2009, for the first time since 1955. That’s how bad the 2009 recession was …

38 Author who was a childhood friend of Harper Lee : CAPOTE

53 Some are traditional, in brief : IRAS

3 Camera mentioned in Paul Simon’s “Kodachrome” (not a Kodak!) : NIKON

The song “Rudolph the Red-Nosed Reindeer” was written by Johnny Marks, and was based on the story created by Marks’ brother-in-law Robert L. May.

An autoimmune disease is one in which there is an immune response not against an invading pathogen, but rather against a normal body part. Examples of autoimmune diseases are lupus, multiple sclerosis, psoriasis and rheumatoid arthritis.

12 Use of a cushion or a backboard : BANK SHOT

In games like pool and billiards, a “bank shot” is one in which the object ball is bounced off one or more cushions prior to being pocketed.

The name of the fruit called a “pomegranate” comes from the Latin “pomum” meaning “apple” and “granatum” meaning “seeded”.

His name was Rico
He wore a diamond
He was escorted to his chair, he saw Lola dancing there
And when she finished, he called her over
But Rico went a bit to far
Tony sailed across the bar
And then the punches flew and chairs were smashed in two
There was blood and a single gun shot
But just who shot who?

A “preppy” is a student or graduate of a preparatory school. Such a school is designed to prepare students for college, and is often private with expensive fees.

Arlen Specter was the US Senator for Pennsylvania, famous for switching from the Republican to the Democratic Party in 2009. In 2010 he lost the Democratic primary and his seat went to Pat Toomey, a Republican. Spector developed a reputation for himself of being hard to work with over the years, earning the nickname “Snarlin’ Arlen”.

49 Initials of the person who said “Fight for the things that you care about, but do it in a way that will lead others to join you” : RBG