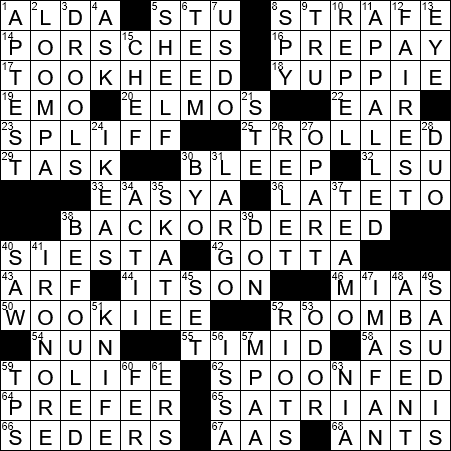 Themed answers each comprise letters that in alphabetical ORDER, but BACKWARDS:

8 Attack from the air : STRAFE

We tend to say the name “Porsche” in English as if it is perhaps French, pronouncing it as one syllable. In German, it is pronounced with two syllables: Por-sche.

20 Red dolls made to be tickled : ELMOS

“Spliff” is a term describing a cannabis joint, and is of West Indian origin.

32 Sch. whose mascot is Mike the Tiger : LSU

“Gut course” is a slang expression describing an academic course of study that is undemanding.

Mia Farrow is an energetic, award-winning actress who really hasn’t looked back in her career since playing her first lead role, in “Rosemary’s Baby” back in 1968. Her on-screen celebrity is matched by the interest created by her personal life. Farrow’s first husband was Frank Sinatra, a wedding in 1966 that received a lot of attention partly due to the couple’s age difference (she was 21, he was 50). Her second husband was almost as famous, the magnificent musician André Previn. Farrow then moved in with Woody Allen, a relationship that famously fell apart when Farrow discovered that Allen was having a sexual relationship with Soon-Yi, one of her adopted daughters from the marriage with André Previn.

58 Sch. whose mascot is Sparky the Sun Devil : ASU

“L’Chaim!” is a Hebrew toast meaning “To life!”, with “chai” being the Hebrew word for “life”.

2 Start for a “land” in “Charlie and the Chocolate Factory” : LOOMPA-

“Snow White” is a traditional German fairy tale that was published in 1812 in the collection of the Brothers Grimm. There is also a second, very different Grimms’ Fairy Tale called “Snow-White and Rose-Red”, not to be confused with its more famous cousin. In the latter tale, Snow-White and Rose-Red are sisters who get into trouble with a dwarf, but are rescued by a bear who turns into a prince.

30 Letters on a party invitation : BYO

31 Slow and stately, in music : LARGO

In William Shakespeare’s “Hamlet”, the title character speaks the lines:

I’ll have grounds
More relative than this—the play’s the thing
Wherein I’ll catch the conscience of the King.

Prince Hamlet is trying to prove to himself that King Claudius murdered the former king, Hamlet’s father. He decides to insert a few lines about regicide into a play that is to be performed at court. The hope is that Claudius will react to the reference, hence convincing Hamlet of the new king’s guilt.

59 “Decorates” on Halloween, for short : TPS

61 Places to which patients are rushed in hosps. : ERS