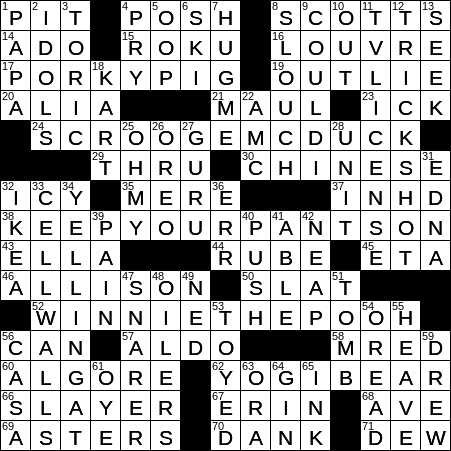 Constructed by: Amanda Rafkin & Ross Trudeau
Edited by: Will Shortz

Themed answers are each cartoon characters who don’t wear PANTS:

The Scotts Miracle-Gro Company was founded in 1868 by one Orlando Scott, and initially sold seed to the agricultural industry. In the early 1900s, Scotts started to sell to homeowners, and mainly supplied lawn seed. The company merged with the gardening company Miracle-Gro in 1955, and then with TruGreen in 2016.

24 Disney character based on a Dickens character : SCROOGE MCDUCK

Gunpowder is the earliest-known explosive chemical. Also called “black powder”, it is a mixture of sulfur, charcoal and saltpeter (i.e. potassium nitrate). The saltpeter is a powerful oxidizing agent, providing the oxygen to burn the sulfur and charcoal, which acts as the fuel in the mixture. Gunpowder was invented by the Chinese in the 8th century.

45 It may be affected by traffic, in brief : ETA

46 Actress Janney who won an Oscar for “I, Tonya” : ALLISON

Allison Janney is a favorite actress of mine, who I first saw on “The West Wing” TV show. Janney is now playing one of the moms on the sitcom “Mom”.

52 “Hunny”-loving A. A. Milne character : WINNIE-THE-POOH

57 Brand of shoes or handbags : ALDO

Santa Monica, California lies on Santa Monica Bay and is in Los Angeles County. The city is home to the world-famous Santa Monica Pier, which opened in 1909.

2 People with stars on the Hollywood Walk of Fame : IDOLS

The Hollywood Walk of Fame is a series of sidewalks taking up 15 blocks of Hollywood Boulevard and 3 blocks of Vine Street in Hollywood. The Walk of Fame is an ever-changing monument dedicated to those who have achieved greatness in the entertainment industry, both in front of and behind the camera. The first stars installed in the sidewalk were a group of eight, officially laid in 1960. That group consisted of:

7 Message on a candy heart : HUG ME

26 Cookie that may be pulled apart or dunked : OREO

In Spanish, a “condominio” (condominium) “por ejemplo” (for example) is a “casa” (home).

Jalisco is a state on the central-west coast of Mexico. The capital city of Jalisco is Guadalajara.

In Italian, there are “sessanta minuti” (sixty minutes) in an “ora” (hour).