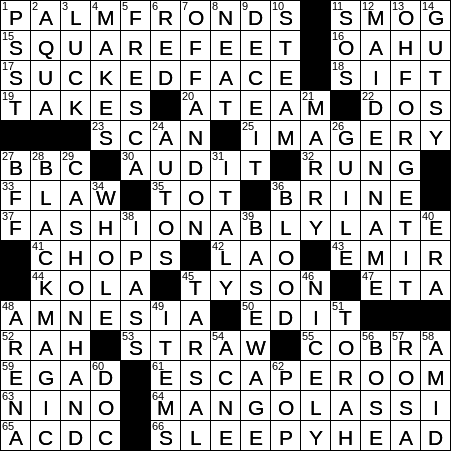 16 Where to visit the U.S.S. Arizona Memorial : OAHU

Achilles is the protagonist in Homer’s “Iliad”. When Achilles was born, his mother attempted to make him immortal by dipping him into the River Styx. As he was held by the heel as he was immersed, this became the only vulnerable point on his body. Years later he was killed when a poisoned arrow struck him in the heel. That arrow was shot by Paris.

Cicely Tyson is an actor known for her performance in the film “Sounder”, for which she received an Oscar nomination. In the outstanding mini-series “Roots”, she played the role of Binta, Kunta Kinte’s mother back in his homeland of Gambia.

We use the idiom “the straw that broke the camel’s back” to refer to an seemingly inconsequential action that can cause a cataclysmic failure given the pressure on the situation that already exists. Our English idiom comes from an Arabic proverb with a similar wording and meaning.

Lassi is a yogurt-based drink from India. Popular variants are namkeen lassi (which is salty), sweet lassi and mango lassi. There is even a bhang lassi, which is infused with a liquid derivative of cannabis.

5 Alternative to 7Up : FRESCA

11 Title of hits by Abba and Rihanna : SOS

The ABBA song “SOS” was originally titled “Turn Me On”. In the movie “Mamma Mia!”, “SOS” is performed by Meryl Streep (brilliantly) and by Pierce Brosnan (terribly).

27 With whom you might have a Snapchat streak, informally : BFF

45 Kind of bone near the tibia and fibula : TARSAL

The Torah, the first five books of the Hebrew Bible, are traditionally believed to have been written by Moses. As such, they are sometimes referred to as the Law of Moses, or Mosaic Law. Those five books are: