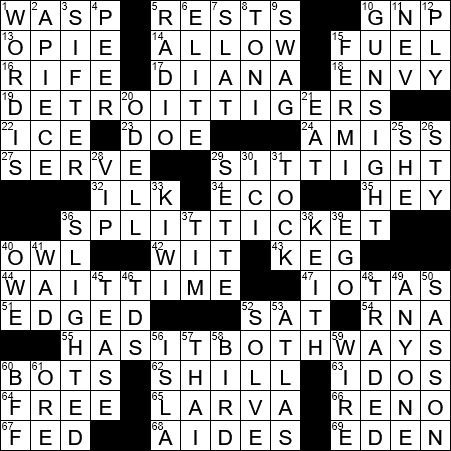 Today’s Reveal Answer: Has It Both Ways

Themed answers each HAVE the letters “IT” BOTH WAYS, in both directions:

The tradition in the UK is to invest the heir-apparent to the throne with the title of Prince of Wales. Since Prince Charles is that heir today, he is called Prince of Wales and his first wife was known as Diana, Princess of Wales.

36 Ballot for candidates of more than one party : SPLIT TICKET

A split-ticket ballot is one in which a voter votes for candidates from more than one political party.

60 Sources of much spam : BOTS

Our word “nuptial” is an adjective meaning “of marriage, of the wedding ceremony”. The term derives from “nuptiae”, the Latin for “wedding, marriage”.

“Beloved” is a 1987 novel by author Toni Morrison. The Pulitzer-winning book was adapted into a 1998 movie of the same name starring Oprah Winfrey.

Carson City is the capital of the state of Nevada, and was named for the Carson River. The river was named for Kit Carson, the scout who accompanied the team of European Americans who first arrived in the area in 1843. Carson City was designated state capital in 1864.

15 Physicist Enrico after whom element #100 is named : FERMI

Enrico Fermi was born in Rome, Italy. He moved to the US just before WWII, largely to escape the anti-Semitic feelings that were developing in Italy under Mussolini. Fermi traveled from Rome to Stockholm in 1938 to receive that year’s Nobel Prize in Physics. Instead of returning to Italy, Fermi and his family traveled on to New York City, where they applied for permanent residency. It was Fermi’s work at the University of Chicago that led to the construction of the world’s first nuclear reactor. Fermi died at 53 years of age from stomach cancer . Cancer was a prevalent cause of death among the team working on that first nuclear pile.

“Fm” is the symbol for the element Fermium. Fermium was discovered as a result of the first hydrogen bomb explosion, in 1952. It is named for Enrico Fermi, a leading Italian nuclear physicist of the day. Fermium is the element with the atomic number of 100.

Keith Urban is a country singer from Australia who was actually born in New Zealand. He moved to Nashville, Tennessee in 1992, and married Australian actress Nicole Kidman in 2006.

45 What good movie trailers do : TEASE

We never used the word “gridiron” when I was growing up in Ireland (meaning a grill used for cooking food over an open fire). So, maybe I am excused for taking two decades living in the US to work out that a football field gridiron is so called because the layout of yard lines over the field looks like a gridiron used in cooking.

Maurice Sasson is a brand of jeans owned by Jordache.