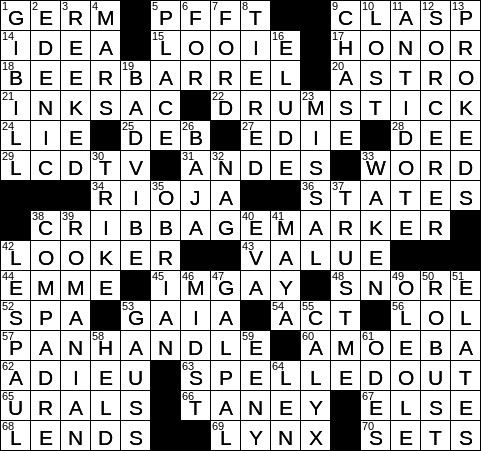 15 One whose charges are sarges : LOOIE

Deb Fischer is a US Senator from Nebraska who has been serving since 2013. She is a member of the Republican Party.

53 Greek goddess of the earth : GAIA

To panhandle is to beg. The term “panhandle” has been in use since the very early 1900s and probably comes from the sticking out of one’s hand and arm, like the handle of a pan.

Both Minnesota professional basketball teams are owned by billionaire businessman Glen Taylor. The Timberwolves play in the NBA, and the Lynx in the WNBA.

What we commonly refer to as the GI Bill is more correctly called the Servicemen’s Readjustment Act of 1944.

Patrick O’Brian was an English novelist best known for a large series of books about an English naval captain during the Napoleonic Wars. O’Brian’s “Far Side of the World” gained some extra notoriety in 2003 with the release of the excellent Peter Weir film “Master and Commander”. The movie’s storyline was loosely based on the novel and starred Russell Crowe as O’Brian’s hero, Captain Jack Aubrey.

Romania sits just east of Hungary and north of Bulgaria in Europe. Romania was formed from the union of two principalities in 1859, Moldavia and Wallachia. The Kingdom of Romania grew larger in size after WWI with the addition of three new regions, including the “vampirish” Transylvania.

Carl Friedrich Gauss was a German mathematician and scientist, by all accounts a child prodigy and one of the greatest mathematicians of all time. He did a lot of work in the field of magnetism in his latter years, and for this the metric system’s unit of magnetic induction was given the name “gauss”.

55 Sepals of a flower, collectively : CALYX

The calyx is the collective name for the sepals of a flower, which form the outermost whorl that forms the flower (the pretty part!).