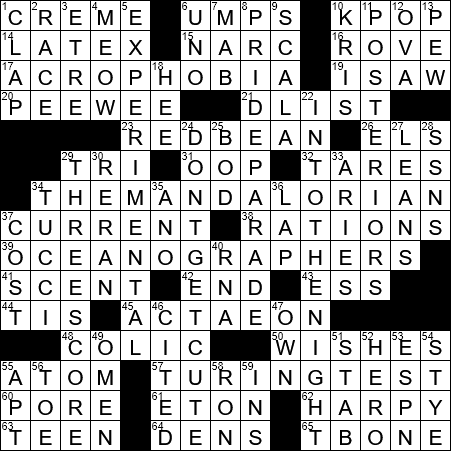 Latex is a naturally occurring polymer made by some plants, that can also be made synthetically. About one in ten of the flowering plants in the world make the milky fluid called latex. It serves as a defense against insects and is exuded when a plant is injured or attacked by insects. Latex is collected commercially and is the source of natural rubber, which can be used to make things such as gloves, condoms and balloons.

There is a letter L (el) at each end of the word “local”.

Palpatine is the Dark Lord of the Sith in the “Star Wars” universe. He is also known as “Darth Sidious” and “the Emperor”. In most of the films in the series, Palpatine is played by Scottish actor Ian McDiarmid. In “The Empire Strikes Back”, he was actually played by a woman. Palpatine was portrayed physically by the wife of special makeup effects artist Rick Baker, and voiced by New Zealand actor Clive Revill.

The hunter of Greek mythology named Actaeon was trained by the centaur Chiron, as was Achilles.

“Chariots of Fire” is British film released in 1981. The movie is based on the true story of two athletes training for and participating in the shorter running events in the 1924 Paris Olympics.

In Greek mythology, a harpy was a winged spirit noted for stealing food from a king called Phineus. Phineas angered the god Zeus and so was punished by being exiled to an island with a buffet of food that he could never eat. Every time he tried to eat, harpies would arrive and steal the food. We use the term today for a shrewish woman or a predatory person.

3 Verb with a circumflex : ETRE

8 N.Y.C. event on the last Sunday in June : PRIDE PARADE

12 Monthly releases of a sort : OVA

28 Some sensitive info, for short : SSNS

47 Sister channel of HGTV : OWN

56 The smallest one is called a minimus : TOE

A “minimus” (plural (minimi”) is a little toe or a little finger.

58 Who joins Gryffindor’s Quidditch team in “Harry Potter and the Order of the Phoenix” : RON