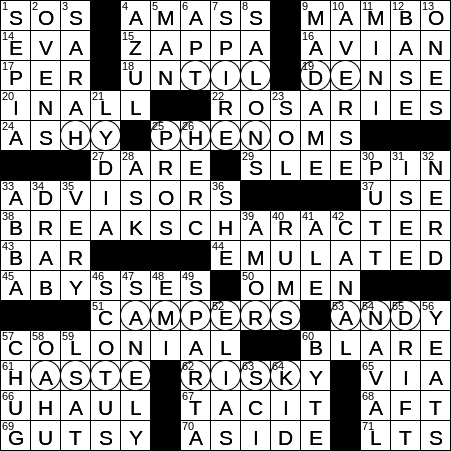 Several rows in the grid contain hidden CHARACTERS used in writing, with each BROKEN by a black square:

15 Frank of the Mothers of Invention : ZAPPA

The Mesozoic Era is also known as “the Age of the Dinosaurs” and “the Age of Reptiles”. Most dinosaurs developed during that time and the era ended with the extinction of all dinosaurs (except the avian species, which developed into our modern birds). The Mesozoic Era started with another cataclysmic event, the so-called “Great Dying”, the largest mass extinction in the history of our planet. During the “Great Dying” over 90% of all marine species and 70% of all terrestrial vertebrate species died off.

“Hyphen” is a Greek word that came into English via Latin while retaining the meaning “mark joining two syllables or words”. It is speculated that the mark was introduced to indicate how a word should be sung. The term comes from the Greek “hypo” and “hen” and translates literally as “under one”.

33 Cabinet members, to the president : ADVISORS

The colonial style of house is very symmetrical, often with a square footprint. The main door is almost always located in the center of the front wall, with two windows on either side. The second floor has five windows, one being located directly over the front door.

61 Something to make in an emergency? : HASTE

If you look at the back of a one-dollar bill there is an eye sitting above a pyramid. This is known as the Eye of Providence, and is similar to the Eye of Horus that we see so often in ancient Egyptian designs and hieroglyphs. The Eye of Providence is a common Christian emblem from the Middle Ages and Renaissance.

26 Nickname for a mythical hero : HERC

40 Captain Morgan and others : RUMS

The Captain Morgan brand of rum comes from Jamaica in the West Indies. It is named for the privateer from Wales, Sir Henry Morgan, who plied his trade in the Caribbean in the 17th century.

56 Poet who wrote “I will arise and go now, and go to Innisfree” : YEATS

59 Hurdle for an aspiring atty. : LSAT