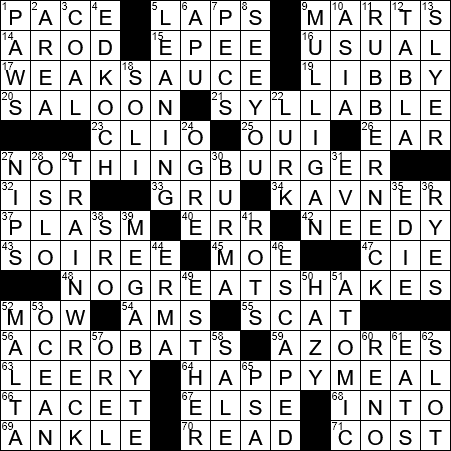 Constructed by: Paul Coulter
Edited by: Will Shortz

Themed answers are each common phrases reinterpreted as “negative fast-food reviews”, things that wouldn’t be part of “HAPPY” MEALS:

Someone who is described by the slang term “weak sauce” is no fun at all, not cool.

21 One of 14 in “supercalifragilisticexpialidocious” : SYLLABLE

The title of the “Mary Poppins” song “Supercalifragilisticexpialidocious” has been broken into it’s individual components and given the meaning “Atoning for educability through delicate beauty”. I am none the wiser …

The cocker spaniel originated in the UK, where the breed was developed for hunting the Eurasian woodcock. It is the hunting of the woodcock that led to the breed’s name.

Julie Kavner is an actress whose big break came playing the role of Brenda Morgenstern on the sitcom “Rhoda” in the 1070s. Nowadays, she is known for voicing Marge Simpson on “The Simpsons”. Kavener leads a very, very private life. She even has a clause in her contract with the producers of “The Simpsons” that she never has to promote the show on video.

Cirque du Soleil is an entertainment company basedThe McDonald’s Happy Meal was introduced in 1977. The Happy Meal was inspired by a selection of food designed in a Guatemalan McDonald’s to suit children that was called “Menu Ronald”. The toys in Happy Meals often tie-in with some movie and so are part of an advertising campaign.

3 Rock around the Christmas tree? : COAL

Ed Koch was a Democratic Representative in the US Congress from 1969-73, and then Mayor of New York City from 1978-89. From 1997 to 1999 Koch was a “judge” on the TV show “The People’s Court”. And in 2004, he collaborated with his sister Pat Koch, and wrote a children’s book called “Eddie, Harold’s Little Brother”, a tale about Ed’s own childhood experiences.

A tabla is a percussion instrument used mainly in the Indian subcontinent. The tabla consists of a pair of hand drums and is similar to bongos.

Cheese Nips are cheese-flavored crackers that first hit the shelves in 1955.

28 City called a “kommune” by its inhabitants : OSLO

51 Kind of number in chemistry : ATOMIC

52 Country from which the name “Buttigieg” comes : MALTA

Orel Hershiser is big into poker now that he has retired from Major League Baseball. Hershiser lives in Las Vegas and when he isn’t working for ESPN, apparently he is at the poker tables, playing professionally. When Hershiser is eliminated in a poker tournament, he is in the habit of presenting the person who ousts him with an autographed baseball.