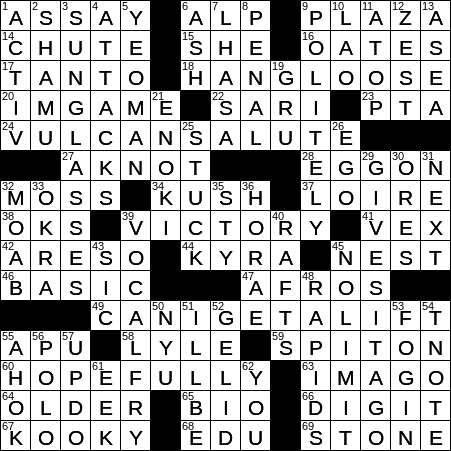 Themed clues each refer to the DIGITS used in a specific hand signal. Themed answers are the meanings of those signals:

Liechtenstein is a tiny European country with an area of just over 61 square miles that is located in the Alps between Switzerland and Austria. It is one of only two doubly-landlocked nations in the world, the other being Uzbekistan. Liechtenstein has the highest gross domestic product per person in the world. The country is a winter sports haven attracting lots of visitors, and is also a tax haven with a strong financial center. There are actually more registered companies in Liechtenstein than there are citizens!

A chute is an inclined plane or channel through which things pass under the influence of gravity.

15 Word that becomes its own opposite if its first letter is removed : SHE

22 Garment often made of silk : SARI

The Vulcan salute is the hand gesture devised and introduced by Leonard Nimoy as Mr. Spock on the original “Star Trek” TV series. The salute is made by raising the hand with the palm forward and with the fingers parted between the middle and ring finger. The gesture is often accompanied with the words “live long and prosper”.

The imago is an intermediate stage in the development of an insect. All four stages are embryo, larva, pupa and imago.

We used pounds and stones in Ireland, for all my life there. However, such measures no longer have any “official” status in the country, as the Irish made the conversion to the metric system. Having said that, many folks still tend to measure body weight in stones and pounds. One stone is equal to fourteen pounds.

In the US Navy, a yeoman is tasked with administrative and clerical work. In fact, the position of yeoman is the oldest rating in the navy. You’ll also see a lot of yeomen in the background on “Star Trek”.

Zest is a brand of soap owned by Procter & Gamble in 1958. Actually, Zest was originally promoted as a cleansing product that wasn’t soap at all, one that did not leave a soap scum. However, the “not-soap” concept has now been dropped, and Zest has been used as the name of a regular old bar of soap since 2007.

30 Gold and silver have them, but not bronze : ORES

36 Goddesses of the seasons : HORAE

50 Where Ross taught paleontology on “Friends,” for short : NYU

New York University (NYU) comprises fifteen schools, one of which is the Tisch School of the Arts. The Tisch is famous for its acting program, with notable alumni such as Debra Messing, Christopher Guest and Josh Radnor.

Paleontology is the study of prehistoric life. My favorite “paleontologist” is Dr. David Huxley played by Cary Grant opposite Katharine Hepburn in the wonderful 1938 comedy “Bringing Up Baby”.

56 Word with shirt or grounds : POLO