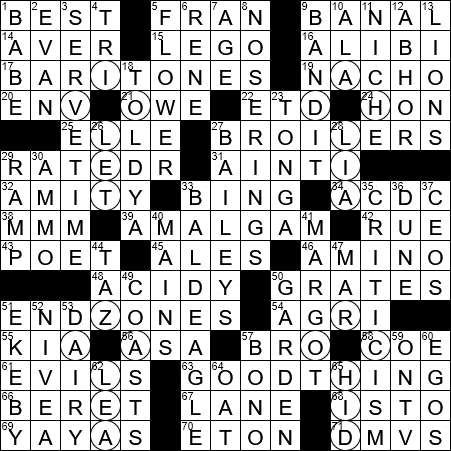 Constructed by: Joe Hansen
Edited by: Will Shortz

Four sets of circled letters in the grid spell out the names of FLOWERS. They also represent those flowers visually, as if they are in a GARDEN:

A common award for winning first place in a competition, especially at a fair, is a blue ribbon. In Canada and the UK, first place is usually recognized with a red ribbon, and blue ribbon is given for second place.

Acceptable nicknames for the California city of San Francisco are “the City by the Bay” and “Fog City”. Locals usually just refer to it as “the City” but never, never “Frisco”.

15 Toy that hurts when you step on it barefoot : LEGO

The bing cherry is the most widely grown sweet cherry in the US. The cultivar was created in Oregon in 1875 by Seth Lewelling. Lewelling was a horticulturist, and he named the cherry for his Chinese foreman Ah Bing.

Proteins are synthesised in the body from amino acids, which are linked together in specific sequences that are determined by the genetic code. The language of the code is a sequence of nucleotides. The nucleotides are arranged in groups of three called “codons”, with each codon determining a specific amino acid.

61 They were released from Pandora’s box : EVILS

6 Descartes who said “I think, therefore I am” : RENE

9 One holding people up : BANDIT

Our word “bandit”, meaning “lawless robber”, dates back to the late 1500s. We imported the term from the Italian “bandito”, which has the same meaning.

The term “Polynesia” was coined in 1756 by author Charles de Brosses when he used it to describe all the islands in the Pacific. This usage was later restricted to what we now refer to as a subregion of Oceania.

The Lia Fáil is the coronation stone that is found on the Hill of Tara, the traditional seat of the High Kings of Ireland. “Lia Fáil” translates from Irish as “stone of destiny”.

The bald eagle is sometimes referred to as the American eagle. It is both the national bird and the national animal of the USA, and appears on the US Seal.

Nivea is a brand name of skin-care products from Germany. The Latin word “nivea” means “snow-white”.