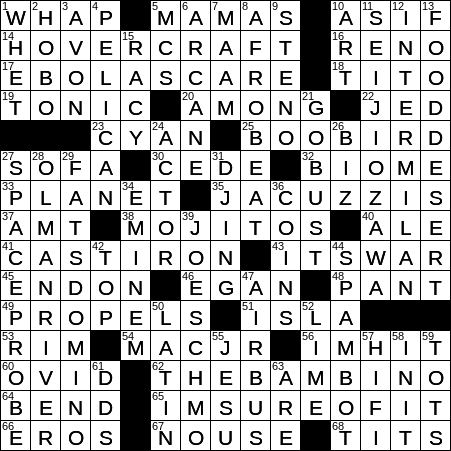 14 Traveler with a turbine : HOVERCRAFT

A turbine is a machine that uses the flow of a fluid (sometimes air) to create rotational work. Simple examples of turbines are windmills and waterwheels.

The Jackson 5 singing group were originally made up of brothers Tito, Jackie, Jermaine, Marlon and Michael. The four eldest brothers continued to perform, using the name “The Jacksons”, after Michael went solo.

23 Color in a color printer : CYAN

A boobird is a sports fan who does a lot of booing.

35 Where people get in hot water : JACUZZIS

38 Drinks sometimes garnished with 52-Down : MOJITOS

41 Material used for weaponry in ancient China as early as 500 B.C. : CAST IRON

Cast iron is an alloy of iron and carbon, with a carbon content that is greater than 1.8%. Iron-carbon alloys containing less carbon are known as steel.

3 Enterprise once known as the California Perfume Company : AVON

4 It has a big pouch : PELICAN

Fela Kuti was a Nigerian musician, a pioneer in the genre known as “Afrobeat”. Fela had an interesting relationship with women, and actually married twenty-seven different women in the same year, in 1978. He then slowed down a little and maintained a rotating roster of only twelve wives at any one time. Fela died from AIDS in 1997.

The Boston Symphony Orchestra (BSO) is one of the Big Five in the US (along with the New York, Chicago, Philadelphia and Cleveland Orchestras). The BSO was founded in 1881, and has been calling Boston’s Symphony Hall its home since the building was purpose-built for the orchestra in 1900. The BSO’s first conductor was German-born British baritone and conductor George Henschel, who was a close friend of composer Johannes Brahms.

Inter Milan is the commonly-used name for the Italian professional soccer team more completely known as F.C. Internazionale Milano. Within Italy, the team is known simply as “Inter”.

28 Who “just keeps rollin’ along” in a classic show tune : OL’ MAN RIVER

Antoine “Fats” Domino was born and raised in New Orleans, with Creole as his first language. He made it into the big time in 1949 when he recorded an early rock and roll record called “The Fat Man”. That record sold over a million copies, the first rock and roll record to achieve that milestone.

44 Sender of many unwanted messages : SPAMBOT

The Bach cantata “Herz und Mund und Tat und Leben” (Heart and Mouth and Deed and Life) has ten movements. The most famous of these movements is the last one, a chorale titled “Jesus bleibet meine Freude”, usually translated as “Jesu, Joy of Man’s Desiring”.

Hi-fi systems were introduced in the late forties. A hi-fi is a piece of audio equipment designed to give a much higher quality reproduction of sound than cheaper systems available up to that point. “Hi-fi” stands for “high fidelity”.

61 Requirement for some drilling: Abbr. : DDS