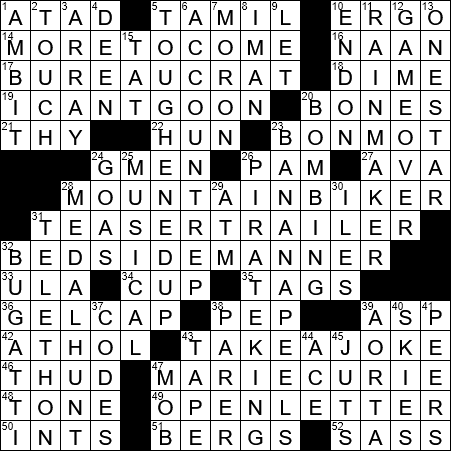 The suffix -ula indicates “small”. For example, the word “formula” is from the Latin for “little form”.

A vanity plate is a vehicle registration plate for which owner’s pay extra money in order to choose their own numbers or letters. There are almost 10 million vehicles with vanity plates in North America, with the highest percentage of vanity plates being in the US state of Virginia. The world’s most expensive personal number plate is the number “1” on Dubai plate, which cost $14 million …

Playwright Athol Fugard was born in South Africa. Fugard wrote plays that opposed apartheid, many of which had to be produced outside of South Africa given the political climate at home. Fugard now lives in San Diego, California.

51 Calves come from them : BERGS

Paula Deen is a celebrity chef from Savannah, Georgia who is noted for her Southern cooking. Deen has been criticized for the amount of salt, fat and sugar in her recipes. The criticism became even more intense when Deen disclosed that she herself has been diagnosed with Type 2 diabetes.

15 Work with a needle, informally : TAT

Slapstick is a physical form of comedy or horseplay. Back in the late 19th century, the term “slapstick” described a device made from two sticks loosely fastened together, which could be “slapped” together to create a sound effect offstage. The sound effect augmented the audience reaction when a clown or actor was given a slap on stage.

24 Impersonate on Halloween : GO AS

26 Gilbert and Sullivan’s “glorious thing to be” : PIRATE KING

“The Pirates of Penzance; or, The Slave of Duty” is an operetta by Gilbert & Sullivan. “Pirates” is still performed regularly today, and even though I’ve seen a lot of Gilbert & Sullivan over the decades, somehow I’ve missed this one …

French Polynesia (Polynésie française) is a vast overseas territory of France that is located in the South Pacific Ocean. It comprises 118 islands and atolls dispersed over 1,609 square miles, the most populous being Tahiti.

The world’s first telethon took place in 1949. It was a 16-hour fundraiser hosted by Milton Berle that raised over a million dollars for the Damon Runyon Cancer Research Foundation. The term “telethon”, a portmanteau of “television” and “marathon”, was coined in the news media the day after the event. One of the most famous annual telethons was the Jerry Lewis MDA Labor Day Telethon, which raised funds for the Muscular Dystrophy Association for over twenty years, from 1966 until 2010.

39 Source of the brachiocephalic trunk : AORTA

Atlantic City, New Jersey was developed in the 1850s as a potential resort town. The first version of the celebrated Atlantic City Boardwalk was installed in 1870. The city’s heyday came with Prohibition, when illegal drinking and gambling thrived in the backrooms of nightclubs and restaurants. After a long period of decline, Atlantic City was revitalized with the introduction of legalized casino gambling in 1976.

1 Scope : AMBIT
2 Something you shouldn’t do in an art museum : TOUCH
3 Solar ___ : ARRAY
4 Celebrity chef Paula : DEEN
5 Grew a spine : TOUGHENED UP
6 Client’s company contact, informally : ACCOUNT REP
7 Dummkopf : MORON
8 “___ absolute mess” : I’M AN
9 Word that’s also a diminutive suffix : LET
10 Stop at : END ON
11 Big earner at a business : RAINMAKER
12 Message that basically tells you to get a life? : GAME OVER
13 Amazon deterrent : ONE STAR
15 Work with a needle, informally : TAT
20 Terrible on opening weekend, say : BOMBING
23 Some slapstick props : BANANA PEELS
24 Impersonate on Halloween : GO AS
25 It contains many numbers : MUSICAL
26 Gilbert and Sullivan’s “glorious thing to be” : PIRATE KING
28 Olympic pursuit : MEDAL HUNT
29 “___ inside” (convenience store sign) : ATM
30 Parts of Polynésie française : ILES
31 Form of crowdfunding : TELETHON
32 Lamborghini alternative : BUGATTI
37 Things that can be cracked : CODES
38 One knife in a knife collection : PARER
39 Source of the brachiocephalic trunk : AORTA
40 Heaven, with “the” : … SKIES
41 Gets a hard look (at) : PEERS
43 Athletic trainer’s supply : TAPE
44 A as in Atlantic City? : ACE
45 Projects : JUTS
47 Kind of rule : MOB