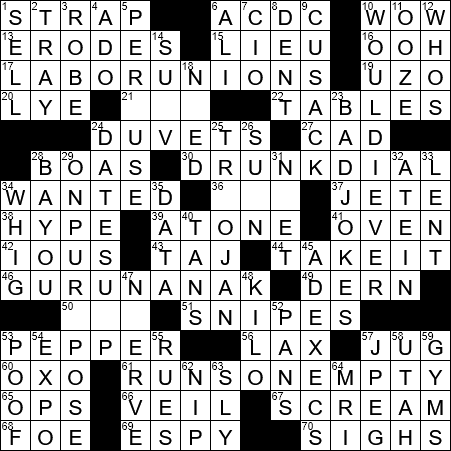 There are three cases of “RUN” appearing in the grid, and each sits ON three EMPTY squares that signify the answer “nothing”:

21 What’s theorized to have preceded the Big Bang : “NOTHING”

A duvet is a large flat bag that is filled with down, feathers or a synthetic substitute that is used as a top cover for a bed. Although a duvet is similar to what is called a “comforter” in the US, there is a difference. A duvet often has an easily removed cover that is usually laundered at the same time as the bottom sheet and pillowcases. We use them a lot in Europe, and generally without a top sheet due to the ease of laundering.

30 Telephone when all lit up? : DRUNK-DIAL

A mug shot is a photograph of a person’s face, one often taken for a police record.

Kolkata (formerly “Calcutta”) is the capital of West Bengal, India. Kolkata grew up around a fort that the British built in the area in 1712. Prior to the arrival of the British, there were three villages at the site, one named Kalikata. Kalikata gave its name to the city that eventually developed. This was anglicized to “Calcutta” which became the official name for centuries, until it was changed back to Kolkata in 2001.

When firing a gun, a “potshot” is a “shot” taken purely to get the prey into the “pot” for cooking. The term “potshot” was coined in the 1830s, hence distinguishing between a shot taken for sport or marksmanship and a shot taken while hunting for game.

I think the idea is that someone who has ears that stick out might be described unkindly as having “jug ears”.

60 Houseware brand that’s easy to read in a mirror : OXO

9 John of “Being John Malkovich” : CUSACK

John Cusack is an actor from Evanston, Illinois. John is noted for appearing in several films with his equally-talented actress sister, Joan Cusack. I think the John Cusack film that I most enjoy is 1997’s “Grosse Pointe Blank”.

“Being John Malkovich” is a 1999 fantasy comedy starring John Cusack and Cameron Diaz, and of course John Malkovich playing himself. The crazy storyline features a puppeteer (played by Cusack) who discovers a portal into Malkovich’s mind.

33 Observance once known as Quadragesima (Latin for “fortieth”) : LENT

The Whig Party (in the US) was active from 1833 to 1856, and was the opposition party to the Democrats at that time. One of the tenets of the Whig Party was the supremacy of Congress over the Executive branch. Prominent members of the party included Presidents Zachary Taylor and John Tyler. Abraham Lincoln was also a Whig while he served a two-year term as a US Representative for the state of Illinois. By the time he became President, Lincoln was a member of the Republican Party.

President William Henry Harrison died in 1841, after only one month in office, simply from complications arising from a cold. Harrison was the oldest person to assume the office of US president, until President Reagan in 1981. He was the first president to die in office, and served the shortest tenure.

48 Approximate weight of a liter of water : KILO

59 Where squatters may be seen : GYMS

63 Word that becomes its own synonym if you change its first letter to “WI” : SLY