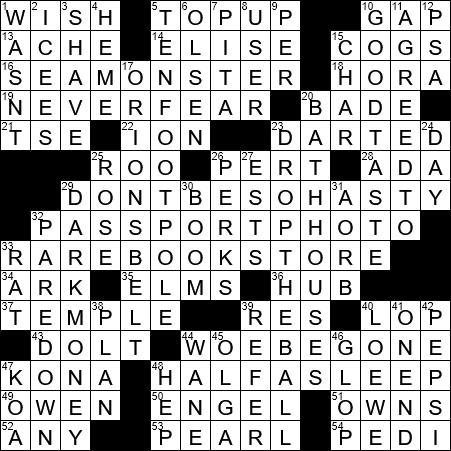 25 Contents of a certain pouch : ROO

Angkor Wat is a temple in Cambodia that was built in the 12th century. The beautiful building is iconic in Cambodia and is even featured in the center of the country’s national flag.

47 Kind of bean on the Big Island : KONA

The largest island in the state of Hawaii is named Hawaii, and nicknamed “the Big Island”. Of the Hawaiian islands that I’ve had the pleasure to visit, the Big Island is definitely my favorite.

“A Prayer for Owen Meany” is a novel by John Irving that was first published in 1989. Although Irving’s work is an independent story, it is written as a homage to “The Tin Drum” by Günter Grass.

Georgia Engel was a very funny comedy actress who is best known for playing Georgette Baxter, wife of Ted Baxter, on “The Mary Tyler Moore Show”. Engel’s father was a vice admiral in the Coast Guard, and her sister was Miss Hawaii for 1967.

6 Colleague of Kent and Lane at the Daily Planet : OLSEN

10 Opposite of kitsch : GOOD TASTE

“Kitsch” is a German word, and is an adjective that means “gaudy, trash”.

Hot Springs National Park is the smallest national park in the whole country. It is located beside the city of Hot Springs, Arkansas and actually includes bathhouses found in the downtown area that use the springs’ hot water.

42 Product whose name comes from the Greek for “digestion” : PEPSI