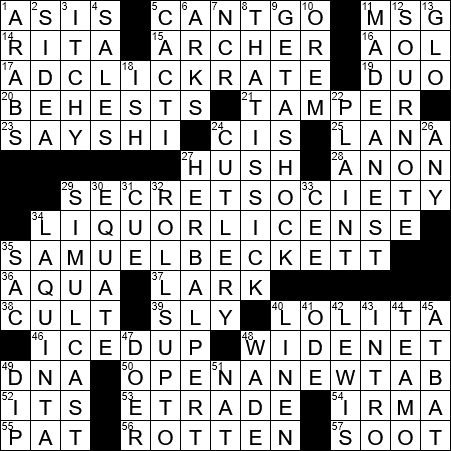 The RITA Awards are presented by Romance Writers of America (RWA) to authors exhibiting excellence in the genre of romantic fiction. The RITA is named for the RWA’s first president, Rita Clay Estrada.

16 One of the pioneers of the internet : AOL

35 Playwright who wrote “We are all born mad. Some remain so” : SAMUEL BECKETT

Stanley Kubrick’s “Lolita” is a 1962 film adaptation of the novel of the same name by Vladimir Nabokov. English actor James Mason stars as a middle-aged man obsessed with a teenage girl, played by 14-year-old Sue Lyon. The cast also included Shelley Winters and Peter Sellers.

Comic Julia Sweeney is perhaps best known for playing the androgynous character Pat on “Saturday Night Live”. Pat appeared in a 1994 movie called “It’s Pat”, which is one of the worst films of all time, or so I am told …

“Garfield” is a comic strip drawn by Jim Davis since 1978. Garfield is an orange tabby cat. Davis named his cartoon hero Garfield after his own grandfather.

5 Landscapers may find them hard to handle : CACTI

24 Part of a place setting : CUTLERY

27 Only musician to hit #1 on the Billboard Hot 100 as both a vocalist and an instrumentalist : HERB ALPERT

The heart of the word “artichoke” is a letter C (cee).

The first La Quinta hotel opened in 1969 in San Antonio, Texas. “La Quinta” is Spanish for “The Villa”.

“Scrim” is the name given to that transparent fabric that hangs down onto a theater’s stage, often used with special lighting for various effects.

Day-colored wine,
night-colored wine,
wine with purple feet
or wine with topaz blood,
wine,
starry child
of earth,
wine, smooth
as a golden sword,
soft
as lascivious velvet,
wine, spiral-seashelled
and full of wonder,
amorous,
marine;
never has one goblet contained you,
one song, one man,
you are choral, gregarious,
at the least, you must be shared.

John Lewis is a civil rights leader, a prominent leader in the 1963 March on Washington in which Martin Luther King Jr. delivered his “I Have a Dream” speech. Lewis suffered a fractured skull as he walked at the head of the march across the Edmund Pettus Bridge in Selma on Bloody Sunday. Lewis was elected to the US House of Representatives in 1987, and was awarded the Presidential Medal of Freedom in 2011 by President Obama.

A goldbrick is someone who lies down on the job, someone who shirks his or her responsibilities. “Goldbrick” arose as slang during WWII, when it meant “to swindle, cheat”. The term was a play on the old confidence trick of selling fake gold bricks.